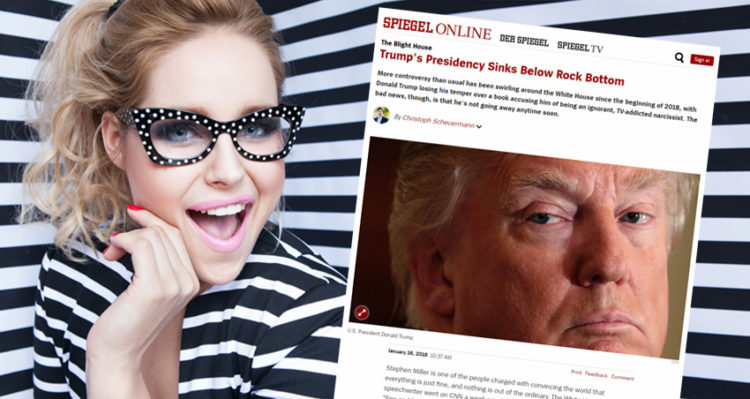 Spiegel Online, the most frequently quoted online media company in Germany, joins the list of countries punching back at Trump’s failed administration.

The article began by discussing the recent controversy swirling around the publication of Michael Wolff’s “Fire and Fury: Inside the Trump White House” and a recent CNN appearance by Trump’s senior policy advisor, Stephen Miller.

Miller attempted to discredit the book, telling CNN that: “The book is best understood as a work of very poorly written fiction,” adding that: “The author is a garbage author of a garbage book.”

Spiegel Online went on to slam that interview, writing that: “Miller’s appearance shows the absurd depths to which the debate over the Trump presidency has sunk.”

Of course, that’s not how a healthy person talks — it is the voice of mania. And the patient, unfortunately, is the most powerful man in the world, a man who is resented even by his closest aids. Secretary of the Treasury Steven Mnuchin called Trump an “idiot.” Gary Cohn, Trump’s chief economic adviser, said the president is “dumb as shit,” and National Security Advisor H.R. McMaster described Trump as a “dope.” All of these quotes are from “Fire and Fury,” and there could hardly be better corroboration of their veracity than Trump’s outbursts on Twitter and elsewhere. Trump’s behavior is childish, and he has now become obsessed with a book that he hasn’t even read, nor is he likely to.

Spiegel Online commences to discuss several troubling aspects of Trump’s presidency to include:

February 3 of 2016, the cover of the magazine featured an image of a knife wielding Donald Trump holding the head of the Statue of Liberty. An animation of the cover actually shows the drops of blood falling from the severed head and splashing at the feet of an angry Trump. 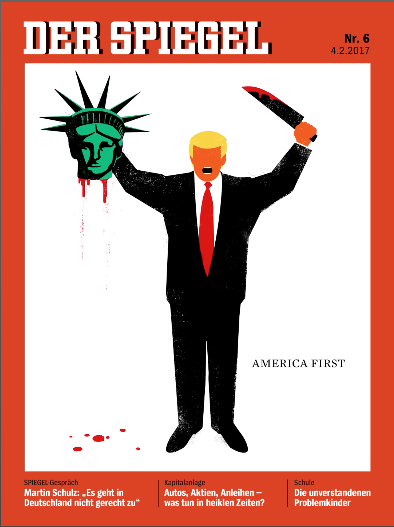 Two days later, the magazine’s editor-in-chief, Klaus Brinkbäumer, penned an editorial likening Trump to the infamous Roman ruler Nero who brought about the destruction of that once great civilization. He called Trump a “pathological liar,” a “racist” and labeled him a “tyrant.”

Injustice is a major issue of our times, as are fears of digitalization and globalization — and rightfully so given that the division of society and the speed of modern life is, in fact, extreme. Trump fuses these worries of his voters with nationalism and xenophobia. That’s how demagogues work and it is how they become effective.

In May, Brinkbäumer went after Trump again with all guns firing. The title of his article is “It’s Time to Get Rid of Donald Trump” with a sub headline that proclaims “Donald Trump has transformed the United States into a laughing stock and he is a danger to the world. He must be removed from the White House before things get even worse.”

Pretty rough stuff, but it gets worse.

Donald Trump is not fit to be president of the United States. He does not possess the requisite intellect and does not understand the significance of the office he holds nor the tasks associated with it. He doesn’t read. He doesn’t bother to peruse important files and intelligence reports and knows little about the issues that he has identified as his priorities. His decisions are capricious and they are delivered in the form of tyrannical decrees.

He went on to say that Trump is a “man free of morals.” He again called him out as “a liar, a racist and a cheat,” summing up that paragraph by calling for his removal from office because he poses a danger to the world.

So much for our standing on the world stage. This is not what I would term making America great.