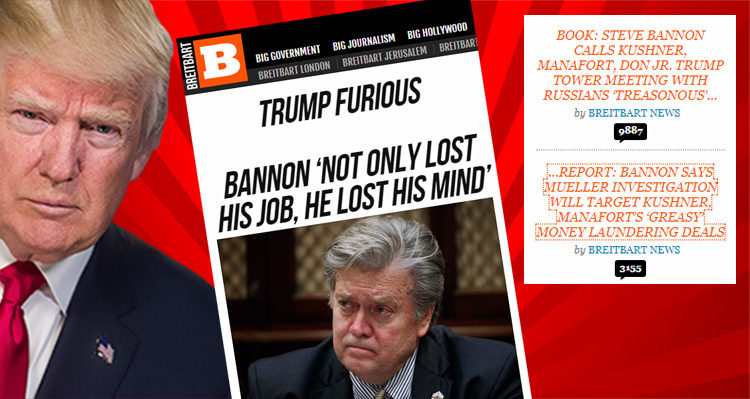 All hell broke loose today as Steve Bannon’s Breitbart News declares war on Trump in the wake of an explosive article by The Guardian.

The walls came tumbling down today between former friends and associates Trump and Steve Bannon in the wake of a news report by The Guardian about an explosive new book – “Fire and Fury: Inside the Trump White House” – by author Michael Wolff.

According to The Guardian:

Trump’s former chief strategist Steve Bannon has described the Trump Tower meeting between the president’s son and a group of Russians during the 2016 election campaign as “treasonous” and “unpatriotic”, according to an explosive new book seen by the Guardian.

Bannon, speaking to author Michael Wolff, warned that the investigation into alleged collusion with the Kremlin will focus on money laundering and predicted: “They’re going to crack Don Junior like an egg on national TV.”

Fire and Fury: Inside the Trump White House, reportedly based on more than 200 interviews with the president, his inner circle and players in and around the administration, is one of the most eagerly awaited political books of the year. In it, Wolff lifts the lid on a White House lurching from crisis to crisis amid internecine warfare, with even some of Trump’s closest allies expressing contempt for him.

Bannon, who was chief executive of the Trump campaign in its final three months, then White House chief strategist for seven months before returning to the rightwing Breitbart News, is a central figure in the nasty, cutthroat drama, quoted extensively, often in salty language.

The White House punched back, releasing a scathing statement about Bannon.

Breitbart swiftly hit back with the top three articles on their homepage dealing with the controversy.

As Breitbart reported in their top news article, titled: “Donald Trump Furious: Steve Bannon ‘Not Only Lost His Job, He Lost His Mind’“:

Trump responded personally to his former chief strategist Steve Bannon’s comments about his family members Jared Kushner and Donald Trump Jr. The statement was released to reporters by press secretary Sarah Sanders prior to the White House press briefing.

The president unleashed a torrent of accusations against Bannon, accusing him of losing his mind after leaving the White House, and having very little to do with his presidency. Trump also taunted Bannon for supporting Republican senate candidate Roy Moore in the Alabama Senate race and losing to the Democrat. “Steve doesn’t represent my base—he’s only in it for himself,” Trump said.

The president also accused Bannon for leaking false information to the media about his influence and importance and accused him of trying to burn down his MAGA agenda.

The next article was titled “Book: Steve Bannon Calls Kushner, Manafort, Don Jr. Trump Tower Meeting with Russians ‘Treasonous’” and began with the following text, followed by a lengthy excerpt from the article in The Guardian:

Former Trump Chief Strategist Steve Bannon says the Mueller investigation is targeting the alleged “greasy” money laundering of Trump associates like Jared Kushner and Paul Manafort as a path to attack President Trump, according to a new book by Michael Wolff called Fire and Fury: Inside the Trump White House.