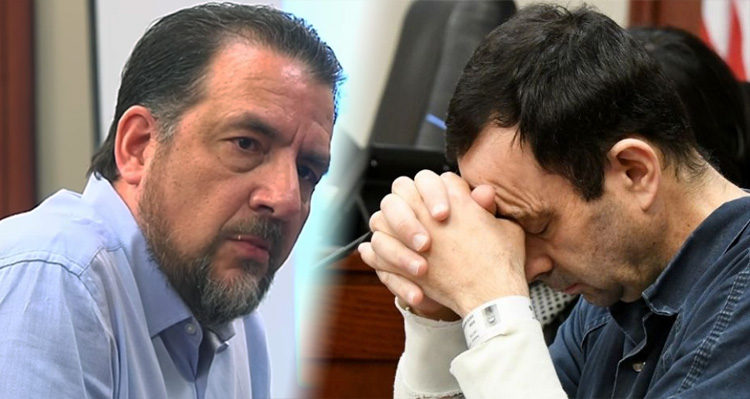 ‘Look at her!’ Coach blasts disgraced gymnastics doctor Larry Nassar for hiding his face from testifying victims at his sexual abuse sentencing hearing.

The New York Post reported that Brennan, “who sent more than 100 girls” to Nassar “erupted in anger during the child molester’s sentencing hearing Wednesday, telling him to look at his victims and to ‘go to hell.'”

“Look at her!” Thomas Brennan shouted at the former USA Gymnastics doctor, who’s kept his head down for much of the victim testimony.

“For the record, go to hell,” he added later.

NBC News elaborated, reporting that: “The outburst from Thomas Brennan came as one of his former athletes, Gwen Anderson, was tearfully testifying at Nassar’s sentencing hearing about being molested by him.”

Nassar, 54, could not be seen on the courtroom camera at that moment, but he has generally kept his head or his eyes down as one victim after another has come to the podium.

“Look at her!” interrupted Brennan, who was standing next to Anderson at the courtroom podium.

After Anderson was done testifying, the judge asked Brennan to spell his name for the record. He did, then paused, looked at Nassar and said, “For the record — go to hell!”

Brennan made his own statement to the court and to Nassar after some prompting by Ingham County Court Judge Rosemarie Aquilina.

“I’ve done clinics with him for years in the past. And I’ve probably sent well over 100 kids to him over the years,” Brennan began. “So the guilt I feel for that is hard to fathom.”

“So, he didn’t only deceive these girls, which is honest to god, that’s the worst of the worst, is what he did to these girls, so they have the voice,”he continued.

“But what you did to everybody else who trusted you and sent girls your way is disgusting. Reprehensible. Unforgivable. That’s all I’ve got to say,” Brennan concluded.

Judge Aquilina responded by reassuring him that “the blame lies solely with the defendant.”

As NBC News reported, Judge Aquilina “will announce the sentence on Friday, after all the women have had a chance to speak. She made it clear on Wednesday that there is no room for leniency.”

“He will never be free,” Aquilina told victim Amanda Thomashow, who previously told NBC News her story of reporting Nassar to MSU three years ago only to see him cleared and allowed to return to work.

“The next judge he faces will be God,” Aquilina said.

You can watch Brennan’s emotional testimony in the clip, below: