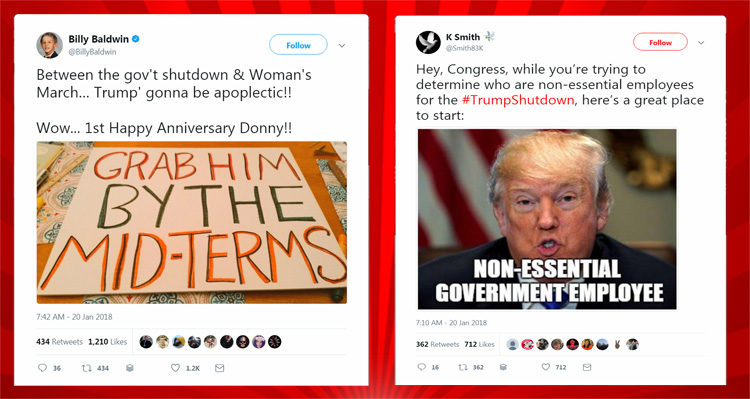 The federal government went into shutdown at midnight, after a key vote in the Senate fell short of the necessary support to keep the government open.

NBC News reported that: “The proposal that failed was the one passed by the House on Thursday. It would have funded the government until Feb. 16, extended the low-income children’s health insurance program, or CHIP, for six years and suspended some Obamacare taxes for two years.”

Continuing, NBC News noted that: “Republicans failed to assemble a simple majority for the measure as some within their own ranks, frustrated with the spate of month-long spending bills, also opposed the short-term solution.”

Republicans were quick to blame Democrats, with Trump hitting his Twitter account last night shortly before the vote, tweeting: “Not looking good for our great Military or Safety & Security on the very dangerous Southern Border. Dems want a Shutdown in order to help diminish the great success of the Tax Cuts, and what they are doing for our booming economy.“

Trump went on to have one of his now infamous Twitter-Tantrums early Saturday morning tweeting:

Democrats are far more concerned with Illegal Immigrants than they are with our great Military or Safety at our dangerous Southern Border. They could have easily made a deal but decided to play Shutdown politics instead. #WeNeedMoreRepublicansIn18 in order to power through mess! This is the One Year Anniversary of my Presidency and the Democrats wanted to give me a nice present. #DemocratShutdown For those asking, the Republicans only have 51 votes in the Senate, and they need 60. That is why we need to win more Republicans in 2018 Election! We can then be even tougher on Crime (and Border), and even better to our Military & Veterans! #AMERICA FIRST!

Democratic Congressman Ted Lieu of California was quick to hit back with an official statement on Twitter, which read:

Trump – despite his crassness, lack of experience governing and showboating – was supposed to be our dealmaker-in-chief. Instead, he rejected a bipartisan deal on DACA and has refused to ensure our military has the long-term certainty of an actual budget. We have a Republican House, Senate and White House and yet they can’t govern. It’s time they stop using our hallowed institutions as a political pawn.

The government should stay open and working for the American people. The last thing we need is a #TrumpShutdown. #DoYourJob pic.twitter.com/ZEvvnk1o5b

As The Hill reported this morning, the first hashtag was trending before the failed Senate vote Friday night with Democratic leaders such as Rep. Nancy Pelosi using it to tweet about the funding battle.

A hashtag linking a potential government shutdown to President Trump became the top trending topic on Twitter on Friday night.

#TrumpShutdown, a hashtag used by Democrats ahead of Friday night’s deadline for Congress to pass a government spending bill, shot to the top of Twitter’s “Worldwide” trending topics.

Here’s where we’re at:

Republicans – who control the House, Senate, and WH – are on the verge of making #TrumpShutdown a reality because they refuse to protect DREAMers and provide long-term certainty for our military, the opioid crisis, CHIP, and other key issues.

Below is a sampling of the tweets from each hashtag:

The President said he was going to run America like his businesses. Apparently we have reached the part where he would usually just declare bankruptcy and run away. #TrumpShutdown

Between the gov't shutdown & Woman's March… Trump' gonna be apoplectic!!

Hey, Congress, while you’re trying to determine who are non-essential employees for the #TrumpShutdown, here’s a great place to start: pic.twitter.com/OzDZyfasVn

The GOP controls every branch of govt. I repeat: They control the WH & Congress. They've lurched from crisis to crisis for months w/o funding disaster recovery, health centers or children's health care. All while Dreamers hang in the balance. This is no way to govern.