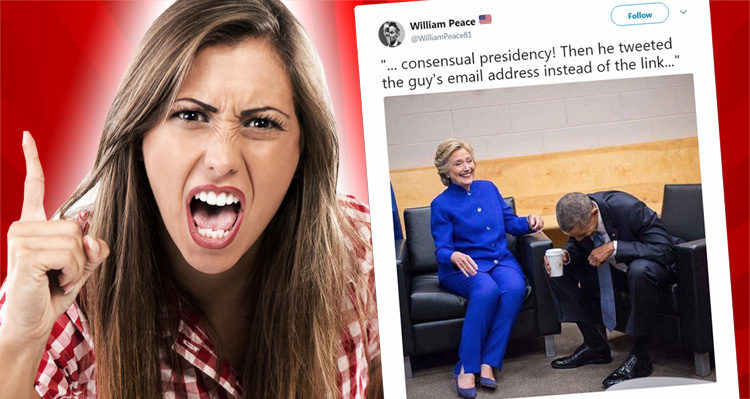 Several news outlets are reporting about Trump’s Sunday night gaffe when he accidentally replaced the word “consequential” with “consensual” while tweeting about a complimentary New York Post opinion piece.

In the article, titled “We’re still better off with Trump than Clinton,” Michael Goodwin praised Trump’s first year in office, writing that it “is turning out to be an enormously consequential presidency.”

In a late-night string of tweets, Trump directed his millions of followers to the column but misquoted it, replacing the word “consequential” with “consensual”. He also left out the author’s references to the President’s “missteps”. Instead of linking to the article, Trump tweeted out an email address for Goodwin.

Trump or someone acting on his behalf deleted the tweet shortly after posting it, replacing it with a new tweet correctly quoting the article and linking to it.

“His is turning out to be an enormously consensual presidency. So much so that … there has never been a day that I wished Hillary Clinton were President. Not one. Indeed, as Trump’s accomplishments accumulate, the mere thought of Clinton in the W.H., doubling down on Obama’s … failed policies, washes away any doubts that America made the right choice. This was truly a change election, and the changes Trump is bringing are far-reaching and necessary.” Thank you Michael Goodwin! (Please read entire column) [email protected]

CNN reported that: “On his second attempt, the President replaced ‘consensual’ with Goodwin’s actual adjective — ‘consequential’ — and included the columnist’s reference to Trump’s ‘missteps.'”

The Morning Herald reported on the response to Trump’s gaffe:

The deleted tweet stirred memories of the famous late-night “covfefe” incident – the President’s garbled tweet about the press that became an instant worldwide joke.

The President’s reference to consent also happened to coincide with the Golden Globe Awards, where Hollywood stars wore black to protest sexual misconduct in the workplace – as some Twitter users pointed out.

Others on Twitter denied that they had “consented” to Trump’s leadership and a number included the hashtag #StableGenius when commenting on Trump’s typo — referring to the President’s series of weekend tweets proclaiming his sanity.

Citing his unlikely trajectory from businessman to reality television star to US president, Trump wrote: “I think that would qualify as not smart, but genius….and a very stable genius at that!”

Below is a sampling of some of the other responses on Twitter, starting with BrooklynDad_Defiant! – who frequently taunts Trump on Twitter.

“I wonder how many ‘stable geniuses’ who’ve bragged about sexual assault and been accused of RAPE and sexual assault have the AUDACITY to tweet ‘consensual presidency’ about themselves. Deleted or not, @realDonaldTrump, the internet NEVER forgets. Nor will your victims,” he tweeted.

I wonder how many "stable geniuses" who've bragged about sexual assault and been accused of RAPE and sexual assault have the AUDACITY to tweet "consensual presidency" about themselves.

Deleted or not, @realDonaldTrump, the internet NEVER forgets.

Nor will your victims. pic.twitter.com/PFnLxbUt7t

Yet again, Americans are confronted with evidence that Trump doesn't know what "consensual" means.#consensualpresidency

his presidency is about as consensual as "grab them by the p***y" was https://t.co/2noXML78ZX

It took dumbass President @realDonaldTrump an hour of Twitter mocking him before he noticed. #ConsensualPresidency pic.twitter.com/hbHsaiPORQ

Trump just tweeted out a quote that his presidency has been enormously consensual. Like Trump knows anything about consensual.