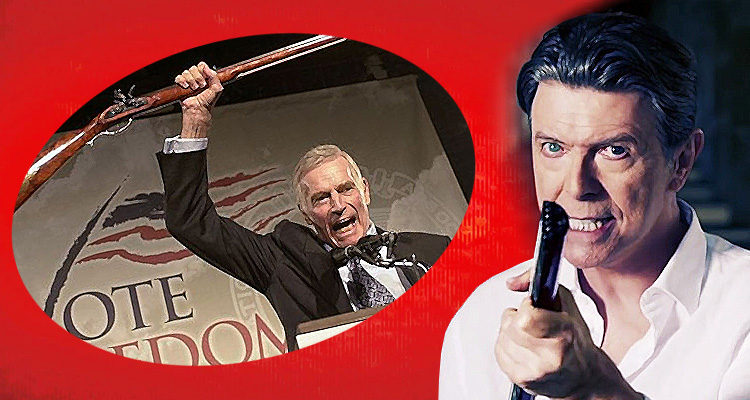 Valentine’s Day is David Bowie‘s fourth single from his 24th studio album, The Next Day. The single was released on 19 August 2013 and continues to be a source of controversy.

The accompanying music video features Bowie singing in an abandoned grain silo in Red Hook, New York and appears to convey a not so subtle anti-gun message but there is a lack of clarity on its exact meaning.

Song Facts claims that Valentine’s Day “has nothing to do with February 14th, but instead namechecks the 1929 Saint Valentine’s Day Massacre where seven mob associates were murdered as part of a prohibition era conflict between two powerful criminal gangs in Chicago.”

And there is stunning visual imagery to support such a conclusion. Take a look at how Bowie’s shadow eerily resembles that of a Thompson Gun – or Tommy Gun – a favorite of organized crime as well as the FBI during Prohibition:

The feared Tommy Gun hidden in a violin case:

Lucy Jones, of the British music publication New Music Express (NME), postulates that there was a “direct reference to Charlton Heston and the National Rifle Association he presided over until 2003.”  As support, she provides two clues from the video: “a guitar that looks like a sawn-off gun, bullets firing past the fret and then the mirror image of Heston with rifle held aloft.”

Below is a still from the video, released by Sony Music:

That image seems to mirror one of Charlton Heston, who served as the president of the National Rifle Association for 5 years. Speaking at the 129th NRA Convention in Charlotte, North Carolina, on 20 May 2000 – just months after the Columbine Massacre – he held up a replica of a flintlock rifle and uttered his famous phrase “from my cold, dead hands” in response to Al Gore’s presidential campaign.1

Tony Visconti, long-time producer for David Bowie and producer of Valentine’s Day, was interviewed by Tim Teeman shortly after the release of the video, during which he addressed the meaning of the song:

“It’s about mental health rather than gun control. It’s all young people doing these shootings. It goes inside the head of the shooter. David gives him the name Johnny, which I think is the name he’s given to about 12 people in his songs over the past 40 years.

“Why Johnny? I don’t know. Maybe it rhymes well: a generic name which helps describe the common man. The issue for him isn’t so much guns, but the mental health of the shooter. In the past two years there have been so many shootings and the next day we’d come into the studio and say ‘What the f***? Why is this happening?’ We were shocked like everyone else and don’t think it’s going to end any- time soon. We have kids and we can’t imagine the horror . . . the worst thing to happen to our kids would be them being shot in public.”

A close friend and associate offers a third possible meaning for the video, stating: “I think the song is about Adolph Hitler. On the 14th of February 1926, the Nazi’s held a meeting in Bamberg, Bavaria, where they declared that -should they win the elections- democracy would end and Hitler would be the great dictator. So, it was his day. A painful contradiction between a day of hatred that would later become the day of love. If you look at it this way, the lyrics of the song are unambiguous.”

The Bamberg Conference was convened by Adolph Hitler in response to concern that the Nazi party was splitting into two different ideologies. As Wikipedia notes, Hitler’s agenda for the 60-plus person meeting was:

You can watch the official music video, below:

Special word of thanks goes out to Wojtek Wacowski for providing background information and inspiration for this article.

FOOTNOTE 1: “For the next six months, [Democratic presidential candidate and then-Vice President of the United States, Al Gore] is going to smear you as the enemy. He will slander you as gun-toting, knuckle-dragging, bloodthirsty maniacs who stand in the way of a safer America. Will you remain silent? I will not remain silent. If we are going to stop this, then it is vital to every law-abiding gun owner in America to register to vote and show up at the polls on Election Day,” Heston told the ecstatic crowd, adding: “So, as we set out this year to defeat the divisive forces that would take freedom away, I want to say those fighting words for everyone within the sound of my voice to hear and to heed, and especially for you, Mr. Gore: ‘From my cold, dead hands!'”