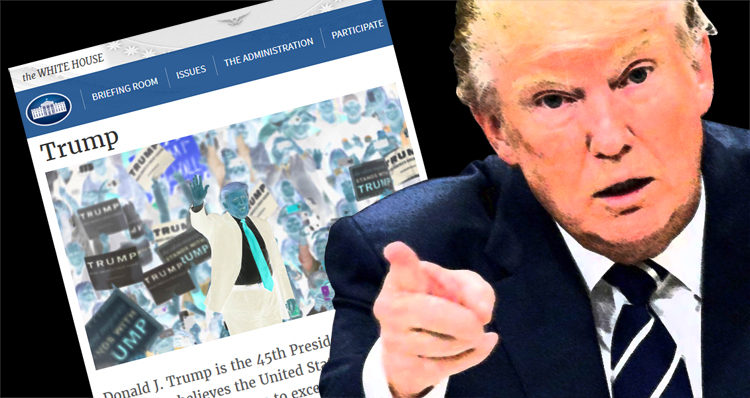 It’s time for a little reality check for Failed Businessman Trump and his fake news site – paid for with your tax dollars.

Trump had the official White House website purged of any trace of Obama’s presidency seconds after he was sworn into office. Gone were topics like Civil Rights, Climate Change, Education, Equal Pay, Seniors and Social Security, Veterans, and the like…. Indeed, gone was pretty much everything except blank pages.

Over the course of time information has begun being restored to the site to include Trump’s official White House bio – the subject of this article.

Although Trump rails at the media, ranting and raving – whimpering and whining about “Fake News,” which by definition appears to be any reporting critical of him and his administration or – more generally – anything he disagrees with or simply doesn’t like; the level of falsehood – of Fake News – embodied in his official bio is mind-numbing, to say the least.

After a brief intro about making America great again [and remember, as Business Insider points out that slogan was prominently displayed on campaign materials by Ronald Reagan in 1982, and as NBC News notes, it was used by Bill Clinton during the 1992 campaign] – it begins with the proclamation that “Trump is the very definition of the American success story. Throughout his life he has continually set the standards of business and entrepreneurial excellence…” and blah, blah, blah.

Or maybe his bio is referring to his string of business FAILURES? Progressive firebrand Elizabeth Warren warned voters last year to “Listen to the experts who’ve concluded [Trump’s] so bad at business that he might have more money today if he’d put his entire inheritance into an index fund and just left it alone.”

Check out what Fortune Magazine had to say about Trump in 2015:

Trump’s net worth has grown about 300% to an estimated $4 billion since 1987, according to a report by the Associated Press. But the real estate mogul would have made even more money if he had just invested in index funds. The AP says that, if Trump had invested in an index fund in 1988, his net worth would be as much as $13 billion.

If you are interested in how others performed during the same time frame, Fortune Magazine reports that Bill Gates’ net worth “increased 7,173% since 1988” and Warren Buffet’s “grew 2,612% in the same time period.”

Conservative website Forbes did an analysis of Trump’s performance as a real estate investor last year, concluding that:

In the finance literature, investors who have outperformed are said to have skill, or talent, and those who do not are called underperformers. Using both independent and self-reported estimates of his net worth, Donald Trump has underperformed his real estate investor peers by 48% and 57%, despite taking more risk. Donald Trump is obviously a skillful presenter and a talented entertainer, but in terms of his investment skills, he is a clear underperformer.

As ATTN: reports: “Warren Buffett Told Everyone Why Donald Trump’s Businesses Failed 25 Years Ago and Nobody Noticed.”

Obama mocked Trump Steaks and Trump wine last December…. The list goes on an on….

And That’s Not All

And that’s not even getting to the bio’s claim that Trump has never run for office before his 2015 campaign – false, as The Hill reports, “In 1999, Trump quit the Republican Party to join the Reform Party and seek that party’s presidential nomination. As he used to say back then about women around the world, he clearly believed ‘he had a shot’ at the nomination — and he just may have.”

Then there are all his claims about the 2016 election results which aren’t exactly wrong, but then again – they are devoid of any mention of the fact both Obama and Bill Clinton stomped his ass in the Electoral College and Hillary Clinton destroyed him with the Popular Vote…. Instead, Trump’s bio only reports comparisons to Republicans.

In conclusion, for all of his disdain for “Fake News” Trump sure is making a valiant effort to create his own – from the official White House Website to Kellyanne Conway’s “Alternative Facts.”