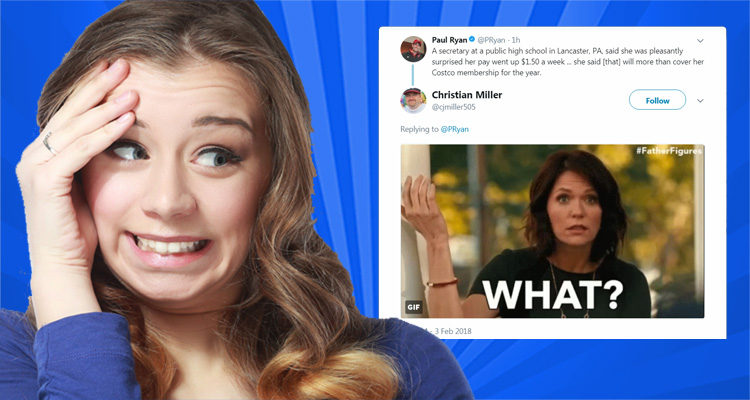 Paul Ryan appears to have lost his mind, taking time out to tweet about $1.50.

Paul Ryan took to his Twitter account on Saturday to gloat about the success of the Republican tax plan.

Ryan was responding to a Tweet by the Associated Press Business News that had been linked to an article reporting that the tax bill is beginning to deliver larger paychecks to workers:

The contentious tax overhaul is beginning to deliver a change that many will welcome — bigger paychecks.

Workers are starting to see more take-home pay as employers implement the new withholding guidelines from the IRS, which dictate how much employers withhold from pay for federal taxes. Those whose checks have remained the same shouldn’t fret — employers have until Feb. 15 to make the changes.

Treasury Secretary Steven Mnuchin has estimated that the new rules will mean more take-home pay for about 90 percent of American workers.

The Associated Press tweeted: “Workers are starting to notice larger paychecks following tax overhaul,” with Ryan responding: “A secretary at a public high school in Lancaster, PA, said she was pleasantly surprised her pay went up $1.50 a week … she said [that] will more than cover her Costco membership for the year.”

A secretary at a public high school in Lancaster, PA, said she was pleasantly surprised her pay went up $1.50 a week … she said [that] will more than cover her Costco membership for the year. https://t.co/yLX1Bod1j0

[As you can see in the embedded tweet above, Ryan removed his tweet, but not before a screenshot was captured.] 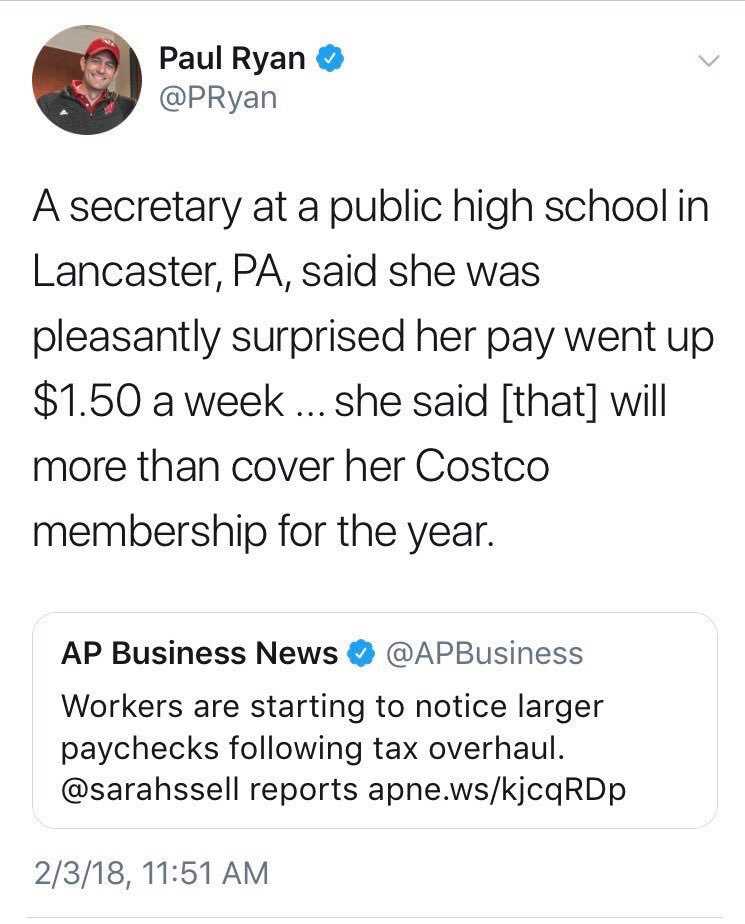 Ryan also responded to that same tweet on Friday, tweeting: “I have heard time and again that the middle class is getting crumbs, but I’ll take it!”

“I have heard time and again that the middle class is getting crumbs, but I’ll take it!” https://t.co/yLX1Bod1j0

Now, I don’t really know which planet Paul Ryan comes from; but on the planet where he dwells at the moment, a $1.50 raise per week is more likely to bring tears of sorrow than ones of the kind of joy that Ryan seems to be experiencing.

As one might expect, Twitter was swift to respond with former New York Daily News and Boston Herald contributor Helen Kennedy leading the pack with a multi-part response detailing the corporate gains from the tax plan with staggering numbers in the billions of dollars and not a measly single digit paycheck gain…

As one Twitter user pointed out: “We know that the teachers union is really the one who negotiated the pay raise for teachers. Paul left that point out. Paul, when will you start paying teachers what they are worth, instead of trying to dismantle the unions that get them the little they do have?”