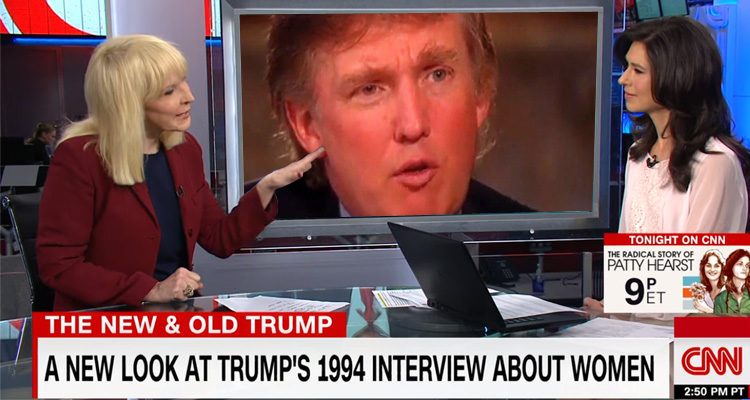 A 1994 ABC News Trump interview shows that he never respected women, despite his frequent claims that his relationships with the women in his life at the time were “great.”

Dan Rather, best known for his 24-year tenure as anchor of ‘CBS Evening News, published a scathing Facebook post in the wake of the controversy surrounding last week’s resignation of White House staff secretary Rob Porter amid allegations that he abused his two ex-wives.

Rather pointed out that “The Rob Porter wife beating scandal that has the White House under siege is a heat-seeking missile to the heart of many of President Trump’s biggest fears and vulnerabilities.”

Then, on Saturday, Trump alluded to the Porter scandal on Twitter, posting: “Peoples lives are being shattered and destroyed by a mere allegation. Some are true and some are false. Some are old and some are new. There is no recovery for someone falsely accused – life and career are gone. Is there no such thing any longer as Due Process?”

” I tell friends who treat their wives magnificently, get treated like crap in return, ‘Be rougher and you’ll see a different relationship.’ Unfortunately, with people in general, you get more with vinegar than honey,” the quote read.

Hard to believe it – then again, maybe not – but that is an accurate quote from a 1994 interview with Nancy Collins from ABC‘s “Primetime Live.”

The transcript of that interview wasn’t released until October 2016 when Collins herself published it as part of an article published by The Hollywood Reporter.

Collins prefaced the transcript, writing in part: “In 1994, I interviewed Donald and Marla Trump at Mar-a-Lago for ABC‘s ‘Primetime Live,’ where I was a correspondent. I was down in Palm Beach to talk about Trump’s self-touted comeback from near financial ruin. Though several quotes from my interview have appeared elsewhere (as has the 11-minute segment that aired in 1994), the majority of this interview has never been published before now.”

She went on the write that: “In fairness, Trump was professional, cooperative, respectful — none of the grabs or touching that has been reported by other women. No, he did not hit on me … probably because I was always surrounded by two cameramen, two sound guys and a producer. With Trump, it’s always a good idea to show up with your own SWAT team.”

Trump talked with Collins about a variety of topics, including his wives Ivana Trump and Marla Maples, prenuptial agreements, women who work – specifically women who work for him – and how he enjoyed creating stars.

Turning to the interview itself and typical of Trump today, he claimed to have a good relationship with the women in his life.

Again reminiscent of his current pattern of  lashing out at women, the following exchange occurred:

Continuing their conversation, Trump suggested that treating women poorly is the best pathway to a successful marriage:

Later on, the interview turned to Trump’s breakup with former wife Ivana.

At one point in the interview, he compared both of his ex-wives Ivana and Marla Maples to one of his buildings:

Trump concluded the portion of the interview focusing on women with the following exchange regarding pre-nuptial agreements:

You can watch some excerpts of that interview in the clip, below, along with Collins sharing some of her thoughts on it with CNN last week: