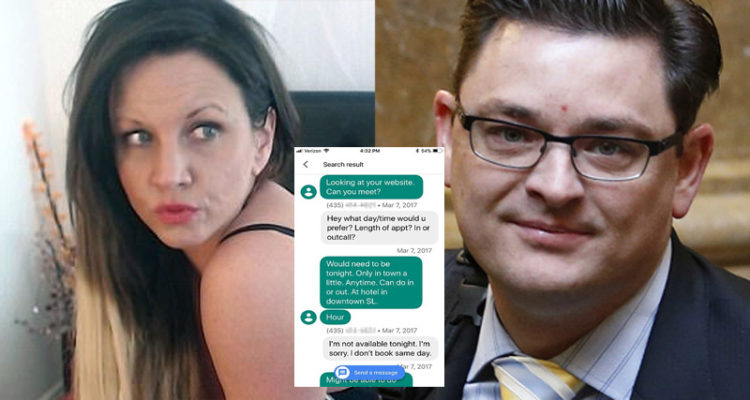 A married Republican lawmaker has resigned after a call girl tells the media he met her twice.

Rep. Jon Stanard, R-St. George, abruptly resigned from the Utah House on Tuesday, but the reasons were not clear. A terse resignation letter said he was stepping down immediately for “personal and family reasons.”

Stanard’s campaign web site and Facebook page were both shut down.

Then, on Thursday, British newspaper the Daily Mail reported that Stanard was accused by a call girl of meeting her secretly at hotels on two occasions.

According to the Daily Mail:

Call girl Brie Taylor claims Jon E. Stanard paid her for sex during two business trips to Salt Lake City, Utah, in 2017. The two exchanged text messages arranging to meet in Salt Lake City on at least two occasions last year. In one particular exchange, Taylor asks Stanard if she should bring any ‘accessories’ or ‘toys’, perhaps a ‘corset’.

Text messages seen by DailyMail.com appear to show that he met with Taylor, 39, in Salt Lake City, Utah, twice last year, after seeing her advert online. The number they were sent from matches Stanard’s public profile on the Utah House of Representatives website. Taylor claims he paid her $250 for each of the one-hour sessions in June and August during which she says she performed [redacted] on him and [redacted].

The Daily Mail also reported that: “Last year, 43-year-old Stanard, of St. George, Utah, voted in favor of stricter laws on prostitution, including increasing the penalty for soliciting sex to $2,500.”

And on his website [that has since been taken down along with his Facebook page] he stated: “I am a strong advocate for conservative family values. I am pro life, as well as for traditional marriage.”

The Daily Mail reached out to Stanard for comment on Tuesday prior to the publication of their expose, presumably leading to his hasty resignation the following day – Wednesday.

In another twist, the Associated Press reported on Friday that Stanard had used taxpayer funds to pay for the hotel rooms where he met Taylor.

Taxpayer funds were used to pay for at least two hotel rooms that a Utah lawmaker who resigned this week is alleged to have used to meet up with a prostitute last year, according to records a state House of Representatives official found Thursday.

After the British newspaper the Daily Mail reported allegations Thursday that Republican Rep. Jon Stanard twice hired a prostitute in 2017, House and state elections officials said they were checking to see if taxpayer or campaign money was used for the hotel stays that the report alleges Stanard booked.

House Chief of Staff Greg Hartley told the Associated Press in a text message that Stanard, who resigned Tuesday night, was reimbursed for hotel stays in Salt Lake City in June and August 2017 when Stanard was attending legislative meetings at the state Capitol, four hours from his home in St. George.

The dates and hotel names correspond with text messages reported in the Daily Mail.