The Stark Difference Between Obama And Trump In Two Photographs 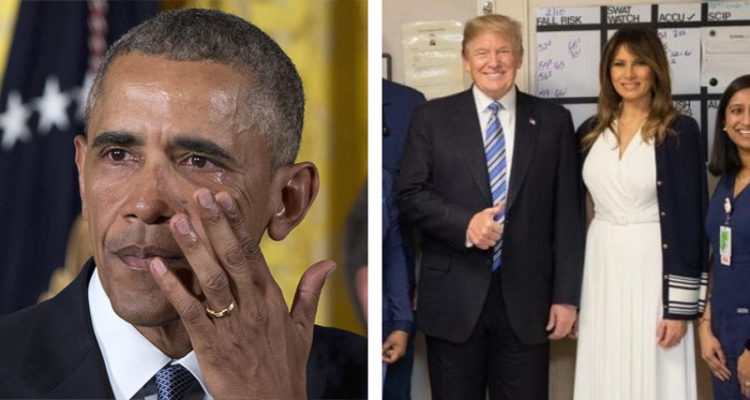 On December 14, 2012, the unthinkable happened when a lone gunman, 20-year-old Adam Lanza, fatally shot 20 children between the ages of six and seven-years-old, and took the life of six adult staff members at Sandy Hook Elementary School in Newtown, Connecticut.  It was the deadliest mass shooting at either a high school or grade school in U.S. history and the fourth-deadliest mass shooting by a single person in U.S. history.

President Barack Obama gave a televised appearance the day of the shootings, telling Americans – the world – that: “”We’re going to have to come together and take meaningful action to prevent more tragedies like this, regardless of the politics.”

President Barack Obama gave a televised address at 3:16 p.m. EST on the day of the shootings, saying, “We’re going to have to come together and take meaningful action to prevent more tragedies like this, regardless of the politics.” Obama had to pause during his speech to wipe away tears and to compose himself so he could continue.

Obama issued an official Presidential Proclamation Honoring the Victims of Newtown and ordered flags be flown at half mast.

As the conservative website, The Daily Caller reported, at the time: “In the first 15 hours following a mass-shooting that claimed more than two dozen lives Friday at a Connecticut elementary school, more than 100,000 Americans took their anger and frustration to the White House, asking the Obama administration for a renewed national debate on gun control.”

On Sunday, Obama’s former White House photographer Pete Souza posted a picture of Obama sitting alone in a classroom at Sandy Hook Elementary prior to attending a vigil at the school.

There is a stark contrast between President Obama’s reaction to Sandy Hook and that of Trump’s to the February 14, 2018 mass shooting at Marjory Stoneman Douglas High School in Parkland, Florida in which 17 were killed and an additional 15 were sent to area hospitals.

As The Independent reported:

Trump reportedly spent just 35 minutes in the hospital and visited only two victims. He has been heavily criticised for his unsympathetic demeanour in photographs, where he grinned and gave the thumbs up.

The stark difference between the two men is best exemplified by the following two images:

This is Obama just last year RECALLING the Newtown massacre versus Trump speaking in Parkland just the other day. See the difference? pic.twitter.com/Up999Y5Nex

With Florida high school students practically begging politicians to do something about the gun violence that threatens their right to a decent education without fearing for their lives, the president of the United States appears to be most concerned about his own image.

And the image Donald Trump chooses to project to the world in the wake of the horrible massacre this week at Marjory Stoneman Douglas High School is one of smiles and a signature thumb’s up.

Both these pictures were taken after national tragedies. Guess which president is a sociopath just posing and which one is capable of genuine empathy. pic.twitter.com/F7Qm7Y0l5H

1: After meeting with families of the Sandy Hook victims for hours, Obama sat alone in a classroom before attending a prayer vigil.

2: After visiting with the wounded in one of the worst school shootings in U.S. history, Trump attends a Studio 54 themed party at Mar-a-Lago. pic.twitter.com/AmZSHMyGhP