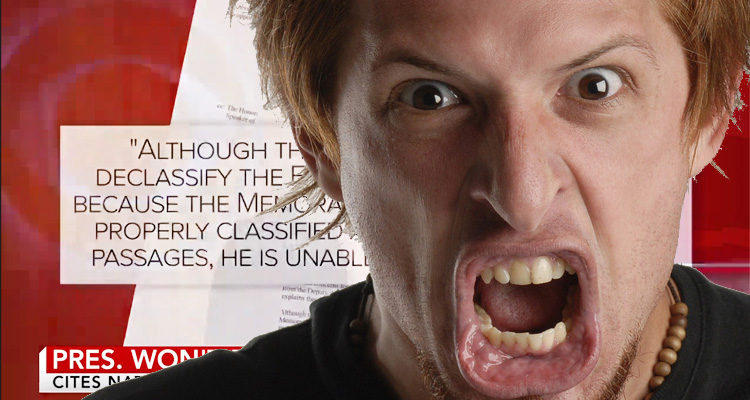 Hypocrisy rains down from the Oval Office as Trump’s latest full-of-sh– moment rules the day.

It should come as no surprise, but Trump refused to release the 10-page memo written by Rep. Adam Schiff, the top Democrat on the House Intelligence Committee.

The House Intelligence Committee voted unanimously earlier this week to release the memo, and it was passed on to the White House for final approval.

White House counsel Don McGahn said in a letter to the committee that the memo contains “numerous properly classified and especially sensitive passages” and asked the intelligence panel to revise the memo with the help of the Justice Department. He said Trump is still “inclined” to release the memo in the interest of transparency if revisions are made.

The hypocrisy in this stance is overwhelming, considering the fact that the Republican memo – otherwise known as the Nunes Memo – was declassified by Trump last week despite objections from the Justice Department.

CBS News elaborated on the White House response, reporting that:

“Although the President is inclined to declassify the Feb. 5th memorandum, because the memorandum contains numerous properly classified and especially sensitive passages, he is unable to do so at this time,” the letter from White House counsel Don McGahn to Devin Nunes, chairman of the House Intelligence Committee, reads.

The White House letter said Justice Department officials should make themselves available to provide technical assistance, “should the committee wish to revise the February 5th memorandum to mitigate the risks identified by the Department.”

In a statement, Ranking Member Adam Schiff, D-California, said, “One week ago, the Department of Justice and FBI implored the White House not to release a deeply flawed and inaccurate memo prepared by Chairman Devin Nunes. The White House ignored their concerns and approved the publication of the Republican memo with no redactions even though the action was described by the agencies as extraordinarily reckless and omitting material facts.”

“The Democratic response sets out the material facts that were necessary for the public to see that the FBI acted properly in seeking a FISA warrant on Carter Page. After promising to treat the Democratic response in precisely the same way, the White House now seeks to have the Democratic memo sent back to committee and revised by the same Majority that produced the flawed Nunes document to begin with,” the statement continued.