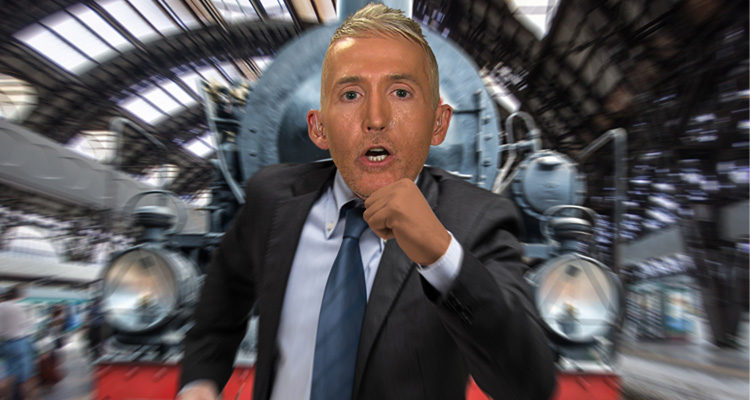 Trey Gowdy, once the highly esteemed head Benghazi witch-hunter ,now appears to be attempting to outrun Mueller and his team of crack investigators.

I don’t presume to know what is happening in Trey Gowdy’s mind, no one can do so except for Trey Gowdy himself; and, were I to venture a guess – I would say that even he has no clue what is going on around him most of the time….

That being said, there does seem to be a clear shift in him lately that I can only ascribe to fear associated with past – as well as possible ongoing – misdeeds.

For instance, it was not that long ago that Gowdy was spearheading Republican efforts to discredit Hillary Clinton before and after she won the Democratic nomination for the 2016 election.

Gowdy spent more than two and a half years of his life and $7.8 million doing his best to collect some dirt on former Secretary of State Hillary Clinton as Chair of the now defunct House Select Committee on Benghazi, which ultimately cleared Clinton of any wrong-doing.

Gowdy went to extremes on several occasions during that investigation, going as far as altering documents in an attempt to frame Secretary Clinton. And don’t take my word for it – his actions were confirmed by the CIA.

In November 2015, Maj. Bradley Podliska, a former investigator on the Benghazi committee staff,  filed a lawsuit against Gowdy claiming, in part, that the committee’s investigation became singularly focused on Hillary Clinton and the Department of State. Then, in December 2017, it was revealed that Gowdy had used tax-payer funds to pay off Podliska.

The Post confirmed the confidential settlement reached between Gowdy and the Benghazi panel and Bradley Podliska after it appeared in a list of settlements released Friday by the congressional Office of Compliance.

As late as December 2017, Gowdy was aggressively working to shut down the House-led investigation into the Russian scandal.

NBC News reported at the time that:

As House Republicans make the case for special counsel Robert Mueller to end his investigation of Russian meddling in the 2016 election, they appear ready to bring their own intelligence probe to an end….

Gowdy told NBC News that it is in the public’s interest to finish as quickly as possible so that they can issue a final report. He accused Democrats of wanting to prolong their work for political reasons and even downplayed the significance of the committee’s work….

“There is not a single soul with an open mind who is waiting on the House of Representatives’ Russia investigation to unlock the mysteries of the world for them,” Gowdy said.

Suddenly, on 31 January 2018, Gowdy announced that he would not be seeking reelection – instead opting to return to the practice of law.

Words cannot adequately express my gratitude to the people of South Carolina for the privilege of representing them in the House of Representatives. The Upstate of South Carolina has an incredible depth and breadth of assets including numerous women and men capable of representing us. I will always be grateful for the opportunity to serve in the People’s House and-prior to Congress-to advocate on behalf of justice in our court systems.

I will not be filing for re-election to Congress nor seeking any other political or elected office; instead I will be returning to the justice system. Whatever skills I may have are better utilized in a courtroom than in Congress.

Days later, in what can only be described as an extreme pivot from his earlier support for Trump, Gowdy spoke out in support of Robert Mueller and his ongoing investigation.

Appearing on Sunday’s “Face the Nation,” [04FEB18] Gowdy spoke with CBS News White House and Senior Foreign Affairs Correspondent Margaret Brennan, in his first interview since he announced he would not be running for reelection in 2018.

Brennan asked Gowdy about Trump’s tweet on the morning of Saturday 03 February 2018 in which he claimed the Nunes memo “totally” vindicated him of any Russian collusion or obstruction of justice.

Gowdy responded: “I would say this – I am sure the president is pretty frustrated. Adam Schiff prejudged the investigation before we interviewed the first witness… I don’t think it [the memo] has any impact on the Russia investigation.”

Gowdy also went on the record stating that he fully supported Robert Mueller and his Russia probe:

“I am on record as saying I support Bob Mueller one hundred percent,” Gowdy said, later adding “You need an investigation into the Trump Tower and the Cambridge Analytica email, separate and apart from the dossier. So those are not connected issues to me. They may be for other Republicans, but they’re not for me. I say investigate everything Russia did, but admit that this was a really sloppy process…”

He also stated that he did not think that Trump should fire Deputy Attorney General Rod Rosenstein, telling CBS News that he has had a “really stellar career.”

Again, it’s difficult to know what motives may lurk in anyone’s mind, and the inner workings of Trey Gowdy is no exception. Perhaps he is concerned that his past transgressions might catch up with him. [You can view an extensive list of his alleged crimes and misdemeanors here.]

Perhaps it will be determined that Gowdy took funds from Russian oligarchs, as has been the alleged case with other leading Republicans.[1]

Time will tell, but in the meantime – there is reason to question his sudden departure from politics and his shift to becoming one of Robert Mueller’s fiercest advocates in Washington D.C.

Party loyalty is often cited as the reason that GOP leaders have not been more outspoken in their criticism of President Donald Trump and his refusal to condemn Russia’s interference in the 2016 presidential election. Yet there may be another reason that top Republicans have not been more vocal in their condemnation. Perhaps it’s because they have their own links to the Russian oligarchy that they would prefer go unnoticed.