February 6, 2018 by Samuel Warde No Comments 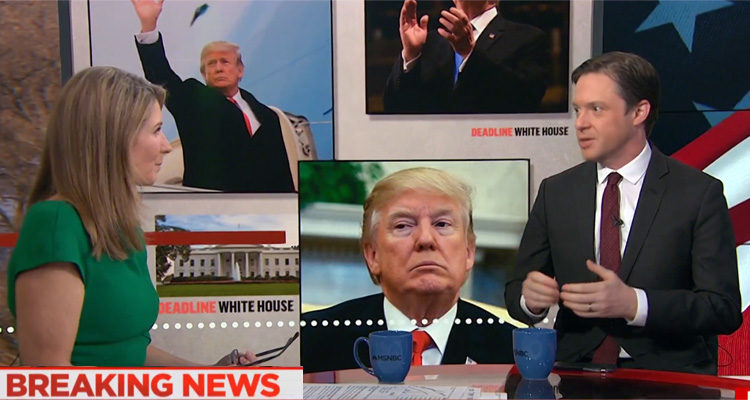 Politico’s  senior foreign affairs correspondent talks to MSNBC about Trump’s pattern of lashing out against the special counsel’s investigation.

The segment began with Wallace playing a segment of an interview with former CIA Director John Brennan during a Monday morning segment of “Morning Joe.”

Asked: “Do you think the investigation is winding down as some people have suggested?” Brennan responded:

In some respects, I think it is still winding up as Bob Mueller continues to investigate. I think there is a lot of information there that Bob Mueller has been able to uncover, and now as he pursues this – I think the coming weeks are going to be important. Over the coming weeks, months, I think it’s going to be critical and if the Republicans are going to continue to pursue this partisan path, I wonder what is going to happen if Bob Mueller’s report comes forth with some compelling information about violations of the law.

“I think it’s more likely he knows a little bit about Bob Mueller, particularly when it comes to obstruction because he doesn’t have insight into actions the president took after he took office,” Crowley responded. “But, Donald Trump often says he has nothing to worry about. He’s saying to people ‘why can’t you wrap up this investigation? There’s nothing there. I didn’t do anything wrong. There’s no collusion. There’s no obstruction.'”

Continuing, Crowley asked: “So why this furious counter attack against the investigation itself? Why these constant threats to fire the investigators? Why this seeming almost sense of panic around this investigation?

“And – you know – occasionally a Trump lawyer will say in the press ‘we want to talk to Bob Mueller. He can come in and ask anything he wants.’ And immediately you start to get this push back from Trump associates who say ‘whoa, whoa, whoa, don’t sit down and talk to Mueller. It’s not a good idea.'”

Wallace stepped in for a moment, adding: “You’re right; Anthony Scaramucci and Chris Christie were both on TV almost within 48 hours of his lawyers saying: ‘sure we’ll cooperate.'”

Crowley responded: “Now to some degree that’s a reflection on Trump outside the context of Russia. That like you never want Donald Trump to speak under oath if you can avoid it because we all know what kind of statements Trump is prone to making.”

Continuing, Crowley stated that he thought Trump was terrified of Mueller’s investigation and is doing his best to try to find some way to get himself out of this mess:

I think you really do get a sense that Trump is terrified about where this investigation is going. I think its absolutely true that Mueller seems to be ramping up, not ramping down. And he wants to get out of this somehow, but it’s not that simple.

I think even if he were to use the Nunes Memo as a pretext to fire Rosenstein, to fire Mueller – that’s not the end of the story. In fact, we’ve seen that people like Don McGahn think that it would only make his plight much worse.

So there really isn’t an easy way out for Trump, but he seems to be experiencing this cognitive dissonance where he thinks there might be one – there must be something he can do. He’s lashing out, but it’s not going to save him.

Trump is running scared. This guy should NEVER have been POTUS! We are the laughing stock of the world due to Trump. I’m so proud to say I didn’t vote for him.pic.twitter.com/EKo2faGHR3