The Best Of Alec Baldwin Mocking Trump, So Far – Video 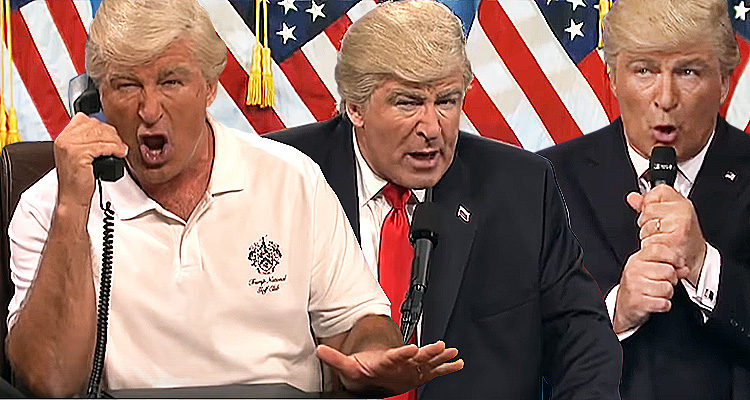 Alec Baldwin’s continued portrayal of Trump is LEGEND. It’s the perfect blend of accurate and hyperbole, and we can’t get enough of it.

Alec Baldwin’s acting career has spanned the better part of nearly four decades so far, but he is best known these days for his leading role in the resistance movement, mocking Trump on the ever popular Saturday Night Live cold opens.

As Liberals Unite contributor Whatever Jones wrote late last year: “Not only is his portrayal of the orange menace hilarious, it frustrates the living sh*t out of Trump and that, in and of itself, is a beautiful thing.”

Last November, Baldwin delivered the keynote speech at an Iowa Democratic fundraiser, delivering what NBC News described as a “withering takedown” of Trump.

Most recently, Baldwin and Trump sparred on Twitter after Trump posted a Friday morning Tweet criticizing Baldwin and his SNL impersonations.

“Alec Baldwin, whose dying mediocre career was saved by his terrible impersonation of me on SNL, now says playing me was agony. Alec, it was agony for those who were forced to watch. Bring back Darrell Hammond, funnier and a far greater talent!” he tweeted.

Using his charity foundation’s Twitter account, Baldwin hit back, tweeting that he would continue doing his Trump impersonations until Trump departs the White House.

He even took a moment to mock Trump, claiming his wife, Melania, was a Saturday Night Live fan.

“And Mr President… please ask your wife to stop calling me for SNL tickets. (Hey, Melania…we’ve got Charles Barkley this Saturday!)” he tweeted.

Baldwin followed up on Saturday, returning to Saturday Night Live to give another one of his brilliant cold opens, this time taking on Trump’s recent firearms summit at the White House and mocking Trump over outgoing White House Communications Director Hope Hicks.

As Deadline Hollywood reported: “Alec Baldwin got in the latest jab in his back and forth with Donald Trump tonight, and without the benefit of Twitter. Bringing his Trump impersonation back to Saturday Night Live – the very one Trump tweeted is ‘agony’ to watch – Baldwin riffed on everything from North Korea to Hope Hicks, and his Trump only had to look at a note card once (to read ‘I hear you and I care’).”

As a side note, as Baldwin discussed his Trump impersonations during an interview published on March 1st by The Hollywood Reporter.

Asked how much longer he might continue playing Trump, Baldwin gave the following response:

Every time I do it now, it’s like agony. Agony. I can’t. If things don’t go in the right direction for the midterms. … I could go out on the street, stand on any corner and tap 10 people on the shoulder. And all 10 of them, in all likelihood, would be more qualified — ethically, morally, intellectually and spiritually — than Trump. I’ll vote for Mitt Romney. I don’t care. Anybody over this guy. It doesn’t matter. We have to get rid of him. And that’s another project I’m working on. I was the keynote speaker at the Democratic Dinner in Iowa, and I’m gonna go do a couple more of those this year. My wife and I agreed that we’re gonna give it everything we have. And then if, God forbid, he wins again in 2020, I’m wondering can I host a game show in Spain.

For those unfamiliar, Next of Ken describes itself as “a producer of reference online video content, covering all things entertainment including video games, movies, TV shows, trends, and more.

They prefaced the clip with the following brief description:

“It’s pronounced ‘chyna!'” Welcome to Next of Ken and in this episode, we’re counting down 41 Times Alec Baldwin Absolutely Nailed Trump. Oh no… we done did. We went political on Next of Ken. Actually, no. We didn’t. Whether you love or hate Trump, you can’t deny that Alec Baldwin’s continued portrayal of Trump is LEGEND. It’s the perfect blend of accurate and hyperbole and we can’t get enough of it.