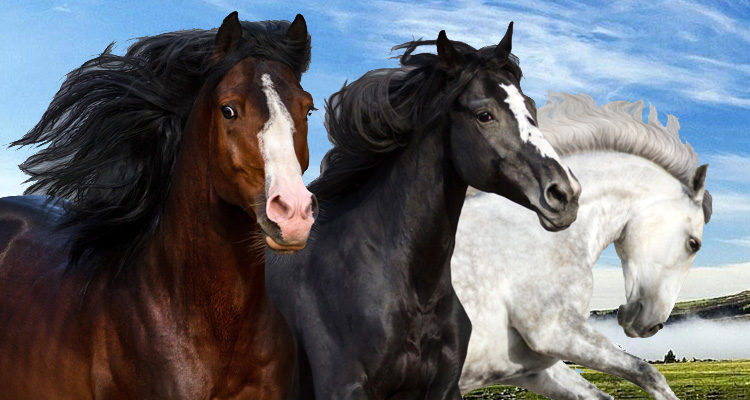 A wild mustang charging across an open plain is a symbol of the untamed majesty of nature. But the predators chasing these horses are anything but natural – they are in fact the Trump administration.

Traditionally, America’s wild horses have held a place of honor as proud icons of the nation’s pioneering history, but all that is about to change if the Trump administration gets its way.

It appears that the Trump administration views them merely as products to be exploited for profit – which includes selling them for food to countries known for their cruel slaughter practices.

To date, the administration has adopted two different strategies to push their agenda – which we will detail below.

The Washington Post published a report in late May 2017, regarding Trump’s fiscal 2018 budget plan:

The Bureau of Land Management spends about $50 million a year to house and feed more than 46,000 wild horses and burros in corrals. Another 73,000 of the animals roam freely across the western states, producing foals and grazing on public lands that conservationists and federal officials say are quickly deteriorating.

The change could lead to sales of wild horses to slaughterhouses in Mexico or Canada, as well as to the culling of herds, to address what the bureau calls an “unsustainable” situation.

Selling America’s wild horses for food is part of a bigger Republican plan to use domestic program spending cuts to fund massive corporate tax cuts, and to eliminate the inheritance tax for wealthy families, like Trump’s.

The Reno Gazette-Journal reported at the time that:

Trump’s budget anticipates the $10 million savings would come through a reduction in the cost of containing and feeding the animals. The savings also would include cutbacks involving roundups and contraception programs.

The 1971 Free-Roaming Wild Horse and Burro Act permits the sale of older, unadoptable animals. But for years, Congress has approved budget language specifically outlawing the sale of any wild horses for slaughter.

ASPCA president and CEO, Matt Bershadker found the move to be highly disturbing, stating: “These innocent horses should not pay the price of bureaucracy and poor land management with their lives. Nor should animal lives ever be seen as a line item in a cost-cutting proposal. America horses deserve better, and we owe them more.”

Suzanne Roy, executive director of the American Wild Horse Campaign, pushed back as well, stating that: “Trump promised to return government to the people, and we trust that he meant it,” adding that: “America can’t be great if these national symbols of freedom are destroyed.”

Fast-forwarding to the end of January 2018, the Bureau of Land Management (BLM) proposed regulatory changes that are being considered by Congress that would imperil wild horses.

ABC News reported that: “A wild mustang charging across an open plain is a symbol of the untamed majesty of nature. But the predators chasing these horses are anything but natural.”

It seems that the BLM is “considering culling these animals for the first time in nearly 50 years, putting the lives of thousands of wild horses at stake.”

Animal rights activists, such Simone Netherlands, the spokesperson for the American Wild Horse Campaign, are concerned that these horses could become extinct.

“The BLM, the very agency in charge of protecting them, is asking Congress for permission to kill them,” Netherlands said, adding: “They’ve stockpiled wild horses in holding pens … and so now what are they going to do with all the horses that they’ve stockpiled? The adoption rates are not high enough so they can’t adopt them all out. So now we have a bunch of wild horses that the taxpayers are paying for and holding facilities and their solution is kill them.”

According to ABC News:

But BLM maintains the activists and the federal agency both want what’s best for the animals and denies that any of their practices are cruel.

“There’s three things that wild horses need: food, water and obviously space,” said Lisa Reid, a BLM spokesperson. “As you can see we do have millions of acres out here, but not every acre is producing viable forage for the horses. So you know just as with any type of species they have to be managed just so that they don’t become … overpopulated and diseased.”

“By our count we are overpopulated by sometimes 300 percent on most of our herd management areas,” she said. “The Bureau of Land Management is a public agency. We have to answer to all groups. … So we have to try and find that balance to make sure that we can do what’s best for the horses.”

What’s next for wild horses?

ABC News concluded their article, reporting that: “the key battle for the horses won’t be fought in the West. Their fate will be decided in Washington, D.C., where Congress will decide if the Department of the Interior’s budget allowing for slaughter will be enacted.”

“Eighty-four percent of Donald Trump’s voters oppose the slaughter of wild horses, and a very narrow band of people are for it because they profit from it,” said Chris Minakowski, a lobbyist and policy analyst.

Those opposed to wild horses continuing to be free say it costs as much as $1 billion dollars over 10 years, but Minakowski said that number didn’t seem reasonable to him.

“It’s not reasonable because they are calculating incorrectly,” he said. “They’re estimating that you have to remove all these horses and put them into a holding and pay for them, which is simply not the case.”

Some animal advocacy groups say the BLM has not proactively pursued horse and burro birth control, though other activist groups have sued the agency over the use of injectable contraception and the spaying of mares…. Matt Bershadker, president and chief executive of the American Society for the Prevention of Cruelty to Animals, said the animals could be “humanely” managed with fertility control, but the BLM “would rather make these innocent animals pay for draconian budget cuts with their very lives.”

Regardless of the rhetoric and excuses, there is more than the lives of innocent animals at stake here. Horse slaughterhouses are notorious for the unspeakable cruelty these proud animals are forced to endure as they’re killed and processed for food.

This is about more than eliminating laws that prevent the sale of wild American horses for food. It represents a cold-hearted approach to who we are as a nation. Putting money ahead of our moral standards is fast becoming the national disgrace that is synonymous with the name Trump.