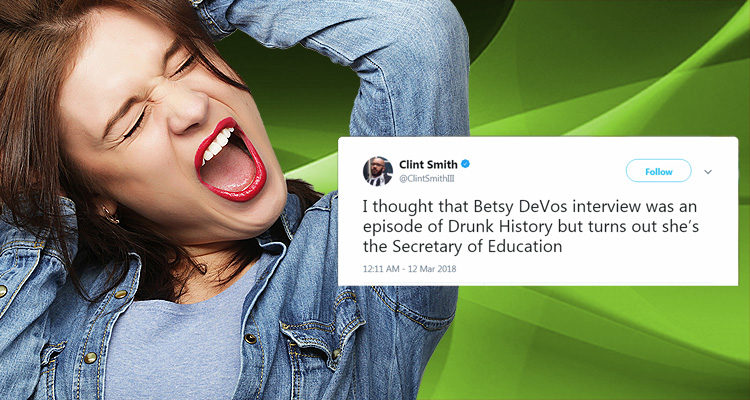 DeVos tells “60 Minutes” that she’s “misunderstood,” but Twitter disagrees and strikes back after she gives one of the most agonizing and cringe-worthy interviews ever.

Trump’s Education Secretary, Betsy DeVos, seemed unable to answer even the most basic questions during an interview with CBS News host Lesley Stahl.

In a wide-ranging interview with “60 Minutes” on Sunday, Devos who requires protection by the U.S. Marshals Service, and who was booed at a commencement speech last year, said she’s “more misunderstood than anything.”

Other news organizations were quick to respond with article titles that pretty much tell you everything you need to know about the interview:

The Washington Post provided a list of “just some of the things that DeVos said — or couldn’t answer — during the interview.”

Axios posted what can only be described as one of the most agonizing and cringe-worthy 107 seconds in the history of television history.

CBS News was kind enough to provide a partial transcript of the interview, including that particular exchange:

As one might expect, Twitter was quick to respond to that horrific interview. A few examples included:

Of all the idiots and sycophants surrounding Trump, Betsy DeVos might be the most clinically unqualified & willfully ignorant. I don't think I've ever seen anyone in government know so little or care so less.

MAGA people are rushing to defend Betsy DeVos, who was ambushed by unfair gotcha questions like “Have you ever been in a cafeteria” and “What do you think schools do”