John Brennan Destroys Any Shred Of Hope For Trump – Video 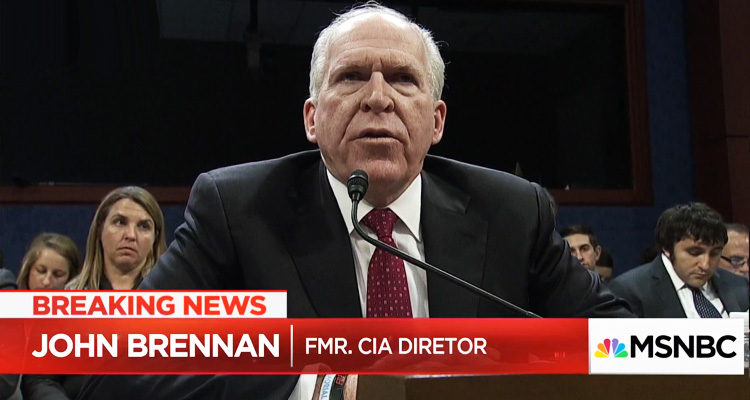 Former CIA director John Brennan says he’s gone from being angry with Trump to being deeply concerned about Trump’s lack of effective leadership.

Brennan joined Wallace during Friday’s episode to discuss the recent developments in the Russia investigation, as well as the turmoil coming out of the White House when he made the haunting remark.

Elaborating on the interview, The Hill reported that: “Brennan told host Nicolle Wallace that the president was ‘ill prepared’ to take on the duties of commander in chief, particularly growing military aggression from Russia and North Korea.”

“It is no secret to anybody that Donald Trump was very ill prepared and unexperienced in terms of dealing with matters that a head of state needs to deal with, head of government, and I think this is now coming to roost,” Brennan told Wallace, adding that:

Our country needs to have confidence that we’re going to be able to deal with Putin, who is flexing his muscles once again on the military front, that we can deal with North Korea, that we can deal with these issues. And if we have somebody in the Oval Office who is unstable, inept, inexperienced, and also unethical — we really have rough waters ahead.

Brennan also discussed the level of chaos surrounding the Trump White House on a near-constant basis, expressing concern that Trump is no more fit to serve as president than when he was inaugurated nearly 14 months ago.

“There’s a part of me that had been very angry at Donald Trump for the things he said and things he did,” Brennan stated, adding: “I am now moving into the realm of deep worry and concern that our country needs strong leadership now.”

Business Insider reported that Brennan also chastised Trump for “‘tweeting about Alec Baldwin’ while Russian President Vladimir Putin was ‘flexing his muscles’ on the military front.”

“When I hear what Vladimir Putin was saying about the nuclear capabilities he has and then the president of the United States is tweeting about Alec Baldwin this morning, I mean, where is your sense of priorities?” Brennan stated, adding: “I think a lot of Americans are looking at what’s happening with a sense of: This is surreal.”

There’s “deep, deep worry and concern for this country’s national security,” he concluded.