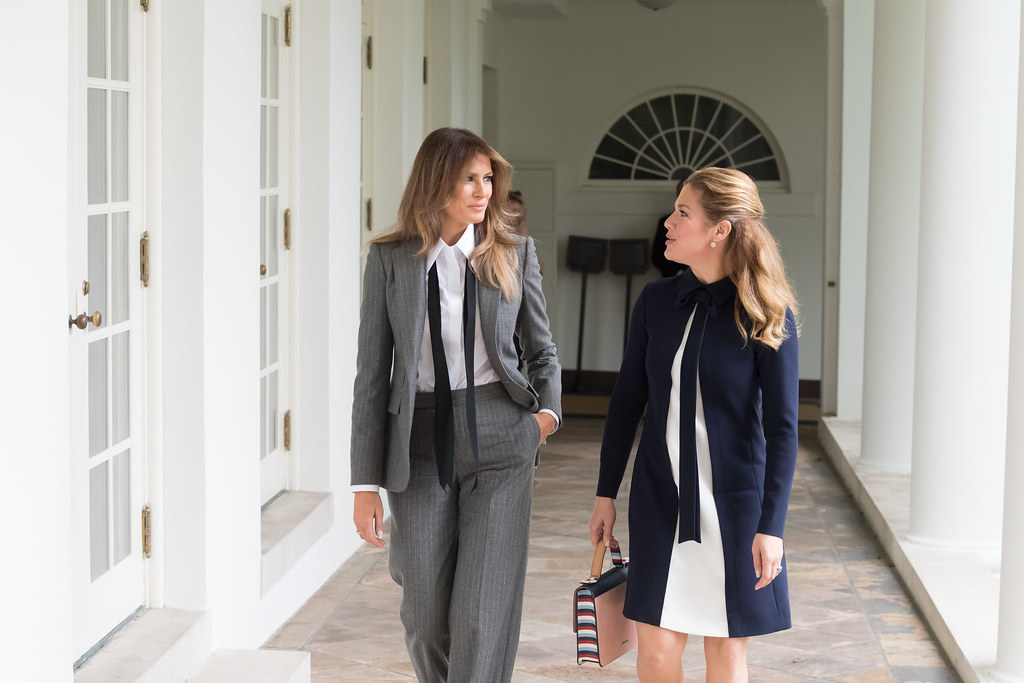 Not wanting to be outdone by her husband, Melania has managed to stoop to Trumpian levels of hypocrisy all by herself.

Melania Trump, America’s First Lady, vowed to take on cyberbullying during a November 3, 2016 speech before her husband was even elected. [Not that there seems to be any doubt that he stole the election in light of the recently disclosed information regarding Cambridge Analytica.]

The Guardian reported on the announcement: “Melania Trump, whose husband has built a public profile partly around his vulgar and offensive Twitter account, called for a gentler and kinder America on Thursday, where children can spend time on social media without fear of harassment.”

“Our culture has gotten too mean and too rough, especially to children and teenagers,” Trump said at a sports center located in a Philadelphia suburb, adding that “It is never OK when a 12-year-old girl or boy is mocked, bullied or attacked. It is terrible when that happens on the playground and it is absolutely unacceptable when it’s done by someone with no name hiding on the internet.”

For the next 16 months her anti-cyber-bullying campaign remained dormant.

Newsweek reported this week that after all that time, Melania hosted “her first ever event to tackle cyberbullying, hosting executives from online companies in a Tuesday meeting on the topic.”

And here’s where the hypocrisy begins to become crystal clear:

The first lady, who announced last year that she would be tackling cyberbullying as her principal cause, appeared to miss the irony of the event and her charity of choice—given her husband’s tendency to lash out on social media.

That hypocrisy was not lost on anyone, almost from the day she made her 2016 campaign announcement.

Her declaration brought out plenty of ire on social media from those who consider Donald Trump the definition of a cyber bully given his aggressive social media attacks against anyone who piques his fury.

Lady Gaga, whose Born This Way Foundation aims to combat bullying, especially of LGBT kids, was scathing, though Gaga’s representative did not return a message from USA TODAY seeking comment on how she feels about Melania Trump now.

.@MELANIATRUMP to say u will stand for "anti-bullying" is hypocrisy. Your husband is 1 of the most notorious bullies we have ever witnessed.

There is also the inherent hypocrisy in her refusal to speak out against her husband’s online bullying. As Newsweek reported: “For her part, Melania has not mentioned Trump’s tendency to cyberbully, despite preparing to campaign for better behavior on the Internet.”

There was one time when she did address his bullying after he lashed out at against Morning Joe hosts Joe Scarborough and Mika Brzezinski.

The New York Times reported at the time that:

The president described Ms. Brzezinski as “low I.Q. Crazy Mika” and claimed in a series of Twitter posts that she had been “bleeding badly from a face-lift” during a social gathering at Mr. Trump’s resort in Florida around New Year’s Eve. The White House did not explain what had prompted the outburst, but a spokeswoman said Ms. Brzezinski deserved a rebuke because of her show’s harsh stance on Mr. Trump.

Melania Trump, the president’s wife — who has said that, as first lady, she will embark on a campaign against cyberbullying — also rejected claims that her husband had done what she is charged with undoing.

“As the first lady has stated publicly in the past, when her husband gets attacked, he will punch back 10 times harder,” Mrs. Trump’s spokeswoman wrote in a statement, referring to the first lady’s remarks during the campaign.

However it is important to point out that her anti-cyberbullying campaign is commendable. As Vanity Fair recently reported:

To be fair, the fact that she’s trying to fix the Internet is not controversial. Very few people are out in the world yelling, “More trolls, please.” It would be fantastic if she could curb bullying and pile-ons and general awfulness that plagues America’s preferred social platforms, especially if she could do so for children.

Vanity Fair added that when it comes to her husband and change is unlikely to occur:

It would be just as wonderful if she could save the rest of us from her husband’s lil’ hot hands. But it seems unlikely. She hasn’t been able to convince Donald Trump, the literal president of the United States, that calling other adults “little” and “disgusting” and “nasty” on his favorite platform does not particularly help her cause, and may even worsen it.

Who knows, though? The fact that Barack Obama loved ice cream never seemed to threaten Michelle Obama’s Let’s Move! initiative, and a photograph of George W. Bush appearing to read a children’s book upside down circulated didn’t hinder Laura Bush’s Ready to Read, Ready to Learn initiative. All of these things are just like the others. Please don’t argue.