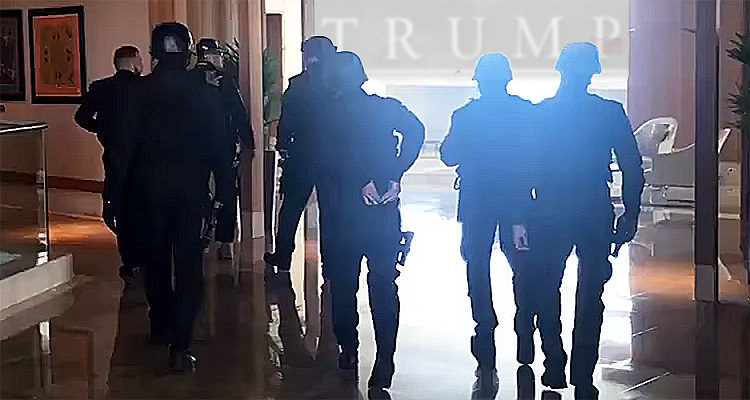 Vanity Fair reported that a 12-day standoff between the majority-owner of a Trump-branded hotel in Panama and Trump organization staff ended when armed police officers stormed the building to enforce a judge’s eviction order.

On Monday, a workman wielding a hammer and a large yellow crowbar went to town on the sign outside Trump International Hotel in Panama. With deliberate thwacks, he removed the letters one by one, beginning with the shiny gold “T” and working his way steadily to the right. A minute later, the word “Trump“ had been removed from the sign entirely.

The erasure of the Trump signage marked the end of a remarkable, days-long stalemate. Hours earlier, an armed police force had stormed the lobby and evicted the hotel’s Trump Organization staff, which had been engaged in a heated standoff with the hotel’s majority owner, Orestes Fintiklis, for almost a week. Fintiklis had been attempting to fire the Organization, which has a contract to run the hotel until 2031, blaming dwindling revenues on their poor management style and tarnished brand name. The dispute, which had been creeping through the courts, reached a climax last week when Fintiklis arrived at the hotel flanked by an entourage and effectively seized the building. Offices were barricaded with furniture; the power was cut; shouting echoed throughout the building, which is 70-stories high and shaped like a sail. At one point, Fintiklis took to the piano in the lobby and banged out a protest song.

The action by Panama’s government resolves a 12-day standoff between President Donald Trump’s family hotel business and Orestes Fintiklis, a private equity investor who bought a majority of the units in the Panama property and then sought to drop the Trump Organization’s management company and brand. Though Fintiklis and other owners tried to fire Mr. Trump’s company last year, the Trump Organization had refused to surrender physical possession of the hotel.

Fintiklis, in arguing for his right to kick out the property manager, accused the Trump Organization of “gross incompetence” that led to swelling costs and tanking revenue, according to ABC News. As a result, he argued in a court filing, he was losing out on his investment, while “lining the [Trump Organization’s] pockets.” Fintiklis has taken his case to court in the U.S. and to international arbitration in Panama in an effort to evict the Trump business

According to the Washington Post, a public prosecutor is investigating Trump employees for refusing orders from Fintiklis, possibly breaking the law in doing so. The employees could be jailed or fined. The Panamanian Labor Ministry is also investigating whether the Trump Organization violated the country’s national labor code by allegedly failing to pay hotel staff.

“I am the owner,” said Orestes Fintiklis, who last year obtained control over more than 200 units in the tower, as police and Trump employees pushed and shoved one another. “Love and peace!”

Fintiklis gained access to the tower’s main office late Monday morning. The colorful property owner told reporters he would not be commenting about the morning’s actions at this point. He then played a song on the piano for the gathered onlookers with lyrics that, when translated, said, “Fascism will not prevail.”

The Trump name was removed from the outside of the building shortly thereafter.

Trump name chiseled off the Trump International Hotel in Panama after weeks of tensions over control of the property. https://t.co/KQuDrUckyr pic.twitter.com/Ph6xlHgwBr