These Trump Cartoons Are Cracking Me Up 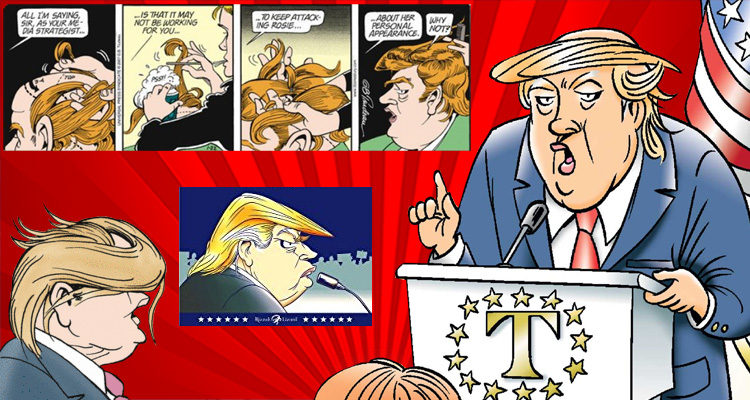 Described by Trump as “overrated,” “a sleazeball,” “a jerk” and “a total loser,” Garry Trudeau has been mocking Trump for over 30 years – and counting.

Garry Trudeau, the creator of Doonesbury and the first cartoonist to win the Pulitzer Prize, has been mocking Trump since the 1980s.

Democracy Now host Amy Goodman interviewed Trudeau in 2016 regarding the release of his new bound collection of cartoons titled: “Yuge!: 30 Years of Doonesbury on Trump.”

Goodman describes Trudeau’s work on Trump in the preface to the interview as follows:

Cartoonist Garry Trudeau has been writing about Trump and a possible run for the presidency for nearly 30 years, prompting Trump to call him “a third-rate talent,” “a sleazeball,” “a jerk” and “a total loser.” […] In September 1987, Trudeau published a series of comic strips that now seem prophetic. In one strip, reporters ask Trump a series of questions about his political ambitions to run for Congress, and Trump responds, “President, think president.” Trump has remained a frequent character in “Doonesbury” ever since, giving Trudeau a chance to make fun of everything from Trump’s hair to his ego to his rampant use of insults.

Trudeau’s Trump memes, both new and old, have taken social media by storm with one of his new cartoons adorning the cover of The Nation‘s special issue on media in the Trump era, published March 2017.

Our special issue on media in the Trump era is out today, cover by Garry Trudeau. Read/download here: https://t.co/bRZcVPrv1X pic.twitter.com/VQ1Nahv1gD

Then there is “Trump the Board Game”:

Here are several more fun ones that you can scroll through:

.@noahbarkin inspired me to check out Doonesbury cartoons about #Trump. Not sure if I should laugh or cry!https://t.co/DM4LcW4D3m pic.twitter.com/b3lrjZwZc3

Doonesbury on Trump, more than 25 years ago. pic.twitter.com/VpNWXwObgZ

Here’s one from 2011 mocking Trump’s long-standing war on President Obama:

Garry Trudeau has included Trump in Doonesbury off and on for 30 years. This one, from 2011, seems particularly telling: pic.twitter.com/OKYAVv0oyJ

Best of all, if you are a fan of Doonesbury you can go to this page on The Washington Post website and see all his daily comic strips there using an interactive calendar to select which day’s Doonesbury comic you want to view.