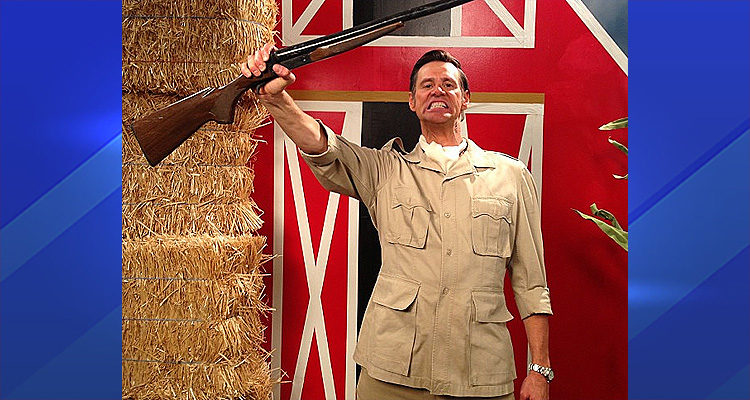 Jim Carrey is back in the news, battling it out with the NRA with a series of paintings. A 2013 video spoof, “Cold Dead Hands,” is making the rounds again as the “March for Our Lives” movement takes America by storm.

Jim Carrey has been busy this month, taking on the NRA, the gun lobby, and do-nothing politicians with a series of paintings posted on his Twitter account.

The round of activity comes as the “March for Our Lives” movement continues to gain international momentum in the wake of the February 14 mass shooting at Marjory Stoneman Douglas High School in Parkland, Florida, that tragically took the lives of seventeen people, wounding an additional seventeen.

However, Carrey’s battle with the NRA first took off on March 25, 2013, when he released a music video with “Funny or Die” mocking America’s gun culture.

The song and video, titled “Cold Dead Hands,” spoofed the vintage television show “Hee Haw” with Carrey taking on the role of Charlton Heston, who interacts with the show’s host.

The title is a reference to a now infamous statement by Heston made while he was acting as spokesperson for the NRA – the National Rifle Association.

Speaking at the 129th NRA Convention in Charlotte, North Carolina on May 20, 2000, Heston ended his speech by stating:

For the next six months Al Gore is going to smear you as the enemy. He will slander you as gun-toting, knuckle-dragging, bloodthirsty maniacs who stand in the way of a safer America. Will you remain silent? I will not remain silent. If we are going to stop this, then it is vital to every law-abiding gun owner in America to register to vote and show up at the polls on Election Day.

Heston then paused to pick up a replica of a flintlock long rifle and concluded:

So, as we set out this year to defeat the divisive forces that would take freedom away, I want to say those fighting words for everyone within the sound of my voice to hear and to heed, and especially for you, Mr. Gore: ‘From my cold, dead hands!’

Carrey begins the video spoofing Heston, who was making a guest appearance on “Hee Haw.” He then assumed the role of the lead singer for Lonesome Earl and the Clutterbusters, backed by musicians dressed as Abraham Lincoln, Ghandi, and John Lennon and singing: “It takes a cold dead hand to decide to pull the trigger.”

Wikipedia summarized the video as follows:

The song ridicules American gun culture, and specifically the deceased Heston, including a derisive caricature of him and declaring that he could not enter Heaven, as even the angels could not pry the gun from his hands. Staged as an episode of the variety program Hee Haw in which Heston is a guest star, the video also features The Eels dressed as Abraham Lincoln, Mahatma Gandhi, and John Lennon (all notable advocates of nonviolence who were assassinated). The single marks the Eels’ first release since their album Wonderful, Glorious earlier in 2013.