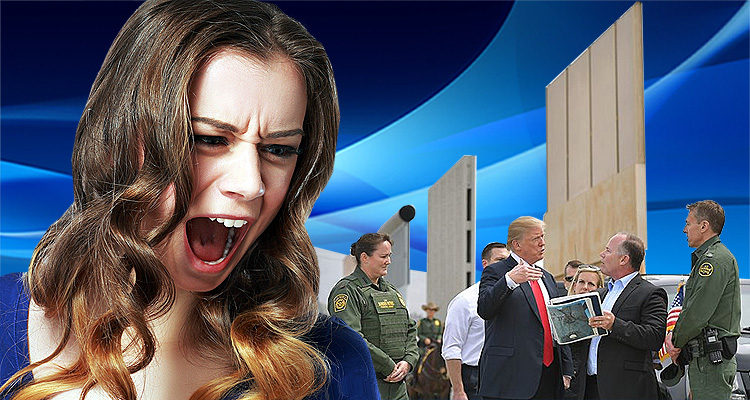 Trump supporters in Texas discover that the joke is on them, because they will end up living in Mexico if Trump’s wall is built.

NBC News reported that Trump “examined eight recently constructed prototypes for the wall near the U.S.-Mexico border” on Tuesday during his first visit to California since taking the oath of office, as he put it to “pick the right one.”

However as Reuters reported: “Mexican residents of a poor Tijuana slum in the shadow of eight prototypes of  Trump’s planned border wall called the project a waste of money and laughed at the idea the monolithic slabs will stop desperate immigrants.”

However, as it turns out residents of Mexico won’t be the only ones needing to be concerned about the wall if Trump is successful at getting it constructed.

Raw Story reported last year that: “Trump supporters in Texas are coming to the realization that their vote for the president may force some of them out of their homes for less than they are worth, with others finding out that — if they stay — they’ll be living in Mexico if his wall is built.”

CNN spoke to border dwellers as part of a special report regarding the impact of Trump’s border wall between the USA and Mexico.

Pat Bell of River Bend, Texas, is facing the prospect of her home ending up on the Mexican side of the border if Trump’s wall is built.

As CNN reported, “Bell is a Trump supporter, but she does not support a wall, especially one that would essentially move her home to the Mexican side of it. She says ‘fences and walls don’t work’ which is exactly why she plans to fight for her property.'”

Bell told CNN that she would hire a lawyer and fight Trump’s wall if necessary. “Absolutely I would go to the people in charge and you hate to say ‘I would get a lawyer,’ but if it come to that issue and you have to I would,” she said.

D’Ann Loop of Brownsville, Texas, told CNN that 10 years ago their property was split with half of it ending up on the Mexican side of the border. After taking the matter to court, all of their land was determined to be in Mexico.

“It left us no property on the U.S. side of the border wall, including my house,” she told CNN, adding that: “Everything was behind — on the Mexican side of the U.S. border fence.” Her husband Ray added that they now must “enter the U.S. through a locked gate.”