Biden And Trump Go To War And Twitter Responds 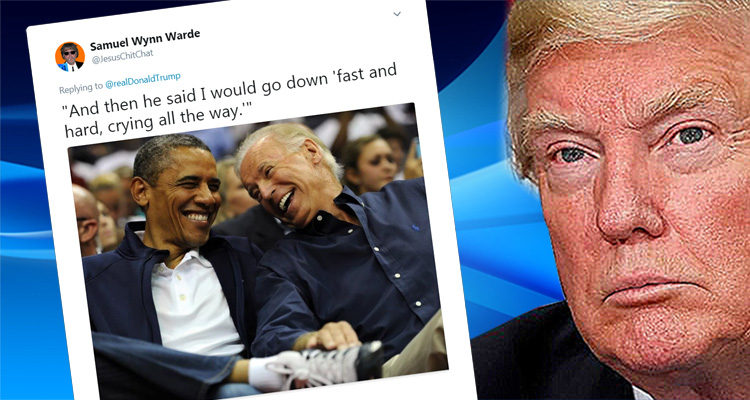 Twitter doesn’t hold back as it responds to this week’s installment of the raging battle between Joe Biden and Trump.

There has been no love lost between former Vice President Joe Biden and Trump.

Biden had harsh words for Trump while campaigning for Hillary Clinton in 2016. Speaking out about the now infamous Access Hollywood recordings Biden told attendees at a campaign rally in Pennsylvania that he would love to travel back in time to high school and take Trump behind the gym.

“What he said he did and does is the textbook definition of sexual assault,” Biden said. “And think about this: It’s more than that. He said that, ‘Because I’m famous, because I’m a star, because I’m a billionaire, I can do things other people can’t.’ What a disgusting assertion for anyone to make.”

Continuing Biden added, “The press always ask me, ‘Don’t I wish I were debating him?’ No, I wish we were in high school. I could take him behind the gym. That’s what I wish.”

Trump shot back during a speech at this year’s Gridiron Club Dinner in Washington.

“You know when he said, ‘I’m going to take you behind the barn’? Oh, just trust me, I would kick his ass. He’d be easy.” Trump said, adding: “But, Joe, gimme a break. A guy who keeps making outrageous statements thinks he has a shot of being president?”

The latest clash began on Tuesday of this week when Biden spoke out again about the Access Hollywood recordings at a Tuesday night anti-rally for his ‘It’s On Us’ advocacy group that aims combat sexual assault on college campuses.

“A guy who ended up becoming our national leader said, ‘I can grab a woman anywhere and she likes it,'” Biden told the audience, adding: “They asked me if I’d like to debate this gentleman, and I said ‘no.’ I said, ‘If we were in high school, I’d take him behind the gym and beat the hell out of him.’ I’ve been in a lot of locker rooms my whole life. I’m a pretty damn good athlete. Any guy that talked that way was usually the fattest, ugliest S.O.B. in the room.”

Trump responded Thursday morning at 6:19 a.m. Eastern, tweeting: “Crazy Joe Biden is trying to act like a tough guy. Actually, he is weak, both mentally and physically, and yet he threatens me, for the second time, with physical assault. He doesn’t know me, but he would go down fast and hard, crying all the way. Don’t threaten people Joe!”

Crazy Joe Biden is trying to act like a tough guy. Actually, he is weak, both mentally and physically, and yet he threatens me, for the second time, with physical assault. He doesn’t know me, but he would go down fast and hard, crying all the way. Don’t threaten people Joe!

Progressive Texas tweeted: “Biden said he would have kicked your ass in school… not in the current sense. He’s no coward, he wouldn’t have congratulated Rusduavfor attacking our country, killings in Britain and his illegitimate election. That is the act of a coward.”

Donald Smith tweeted: “I’m a guy of the president’s age. In my life I never saw nor expected to see such daily evidence of gross immaturity in a president.”

Here are a few other random tweets regarding the ongoing war of words between Biden and Trump:

"And then he said I would go down 'fast and hard, crying all the way.'" pic.twitter.com/Ue3GurCsiu