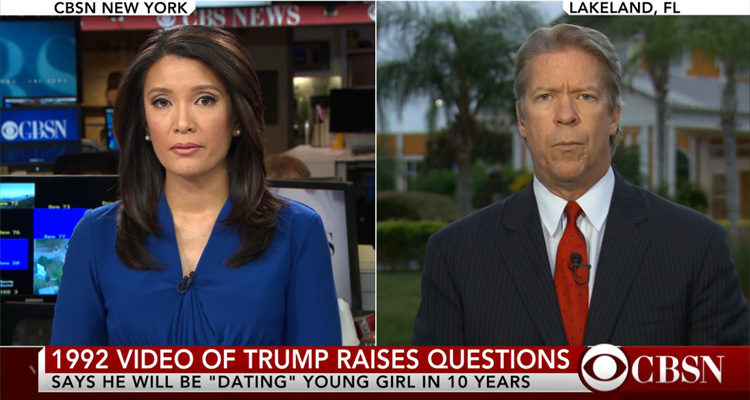 At 38-years-old, Stormy Daniels is 1 1/2 years younger than Don Junior and 2 years older than Ivanka – making this video all that much creepier.

[Daniels] whose real name is Stephanie Clifford, claims in the lawsuit to have had an affair with Trump several years prior to his presidency. However, the lawsuit claims that when he was running for office and multiple women were coming forward to share stories of their own alleged encounters with the then-Republican presidential candidate, [Michael] Cohen intervened in an attempt to keep Clifford from coming forward as well.

Well, that prediction seems to have come true with the recent FBI raid on Michael Cohen’s home, apartment, and hotel room along with Trump’s recent admission that he was aware that Michael Cohen was handling the “crazy Stormy Daniels deal.”

Asked how much of his legal work was handled by Michael Cohen during a phone-in interview last with “Fox & Friends, Trump responded: “As a percentage of my overall legal work a tiny tiny little fraction, but Michael would represent me and represent me on some things. He represents me like with this crazy Stormy Daniels deal. He represented me.”

In the midst of all this chaos, a 1992 “Entertainment Tonight” tape is making the rounds. The tape revealed Trump looking at a group of young girls and remarking that he will be dating one of them in ten years. Trump would have been 46-years-old at the time.

CBS News reported on the tape in October 2016 reporting that:

In an “Entertainment Tonight” Christmas feature in 1992, Trump looked at a group of young girls and said he would be dating one of them in ten years. At the time, Trump would have been 46 years old.

In the clip, Trump asks one of the girls if she’s “going up the escalator.” When the girl replies, “yeah,” Trump turns to the camera and says: “I am going to be dating her in 10 years. Can you believe it?”

There’s also controversy surrounding a 2013 tweet bragging that it takes “talent” to “date girls young enough to be your daughter” is making the rounds.

@rexrode_lisa
"@realDonaldTrump you date girls young enough to be your daughter.That's perverted" Dated. No, that's talent.

Then there’s this little tidbit to further inflame the creepiness scale – the allegations that Trump told both Karen McDougal and Stormy Daniels that they reminded him of his daughter, Ivanka.

First, CNN aired an interview with Karen McDougal, a former Playbοy model who claims that she had a 10-month affair with Trump in 2006. During that time, McDougal says Trump compared her with his daughter, Ivanka Trump. “He’s very proud of Ivanka, as he should be,” McDougal told Anderson Cooper in the interview. “She’s a brilliant woman, she’s beautiful, you know, that’s his daughter and he should be proud of her. He said I was beautiful like her and, you know, ‘you’re a smart girl.’ There wasn’t a lot of comparing, but there was some. I heard a lot about her.”

Then in an interview… on “60 Minutes,” adult film star Stormy Daniels, who says she also had an affair with Trump in 2006, said he also compared her to his daughter. “He was like, ‘Wow, you — you are special. You remind me of my daughter.’ You know — he was like, ‘You’re smart and beautiful, and a woman to be reckoned with, and I like you. I like you.’”