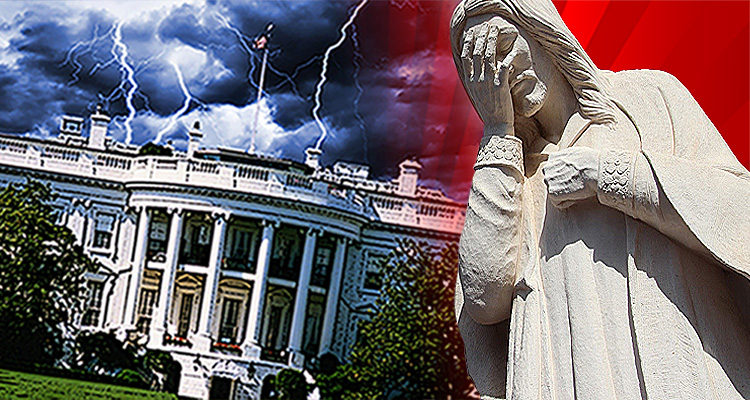 “The beauty of the gospel message — of love, of peace and of fraternity — has been murdered by the ambitions of Trumpish flimflammers who have sold their souls for expediency.” ~Miguel De La Torre, professor and ordained Southern Baptist Minister

Christianity in the Trump Era

The news cycle erupted late January 2018 when noted evangelical leader Tony Perkins announced that Trump got a “mulligan” on his affair with Stormy Daniels.

The leader of the conservative evangelical organization Family Research Council said that evangelicals were happy to give President Donald Trump a “do-over” after a previously unpublished 2011 interview with adult film actress Stormy Daniels revealed that she may have been paid to remain silent about an extramarital affair with Trump in 2006.

Speaking to Politico’s Edward-Isaac Dovere about the Daniels incident, Tony Perkins said evangelicals “kind of gave him — ‘All right, you get a mulligan. You get a do-over here,’” using a golfing term that refers to a free stroke given to a player after a poor shot.

Perkins argued that the good Trump could do for evangelicals made up for his un-biblical behavior and warranted a free pass. He told Dovere that evangelicals “were tired of being kicked around by Barack Obama and his leftists. And I think they are finally glad that there’s somebody on the playground that is willing to punch the bully.”

Denhollander told Christianity Today in a far reaching interview that church is no place for abuse victims to speak out, to seek solace and comfort.

“Church is one of the least safe places to acknowledge abuse because the way it is counseled is, more often than not, damaging to the victim,” Denhollander said, adding that: “There is an abhorrent lack of knowledge for the damage and devastation that sexual assault brings. It is with deep regret that I say the church is one of the worst places to go for help.”

Continuing, she stated that: “[Christians] can tend to gloss over the devastation of any kind of suffering but especially sexual assault, with Christian platitudes like ‘God works all things together for good or God is sovereign.’ Those are very good and glorious biblical truths, but when they are misapplied in a way to dampen the horror of evil, they ultimately dampen the goodness of God.”

The death of Christianity in the USA

Miguel A. De La Torre, an ordained Southern Baptist minister and professor of social ethics and Latino/a studies, wrote an op-ed piece for Baptist News Global in November 2017 discussing the death of Christianity in the USA, connecting it to evangelicals and the rise of Trump.

Referring to Alabama’s failed Republican Senate candidate Roy Moore, De La Torre wrote that: “No greater proof is needed of the death of Christianity than the rush to defend a child molester in order to maintain a majority in the U.S. Senate.”

Continuing, De La Torre connected the rise in white supremacy to the politicization of the church, writing that:

Evangelicals have constructed an exclusive interpretation which fuses and confuses white supremacy with salvation. Only those from the dominant culture, along with their supposed inferiors who with colonized minds embrace assimilation, can be saved. But their salvation damns Jesus. To save Jesus from those claiming to be his heirs, we must wrench him from the hands of those who use him as a façade from which to hide their phobias — their fear of blacks, their fear of the undocumented, their fear of Muslims, their fear of everything queer.

Evangelicalism has ceased to be a faith perspective rooted on Jesus the Christ and has become a political movement whose beliefs repudiate all Jesus advocated.

De La Torre also referenced the “Unite the Right Rally” in  Charlottesville, where protesters clashed with counter-protesters injuring over 30 individuals. The next day a man linked to white-supremacist groups drove his car into a crowd of counter-protesters about half a mile from the rally site, killing one person and injuring 19.

Evangelicalism either remained silent or actually supported Charlottesville goose steppers because they protect their white privilege with the doublespeak of preserving heritage, leading them to equate opponents of fascist movements with the purveyors of hatred. Jesus has yet recovered from the vomiting induced by the Christian defenders of torch-wielding white nationalists calling for “blood-and-soil.”

You might wonder if my condemnation is too harsh. It is not, for the Spirit of the Lord has convicted me to shout from the mountaintop how God’s precious children are being devoured by the hatred and bigotry of those who have positioned themselves as the voice of God in America.

As a young man, I walked down the sawdust aisle at a Southern Baptist church and gave my heart to Jesus. Besides offering my broken heart, I also gave my mind to understanding God, and my arm to procuring God’s call for justice. I have always considered myself to be an evangelical, but I can no longer allow my name to be tarnished by that political party masquerading as Christian. Like many women and men of good will who still struggle to believe, but not in the evangelical political agenda, I too no longer want or wish to be associated with an ideology responsible for tearing humanity apart. But if you, dear reader, still cling to a hate-mongering ideology, may I humbly suggest you get saved.