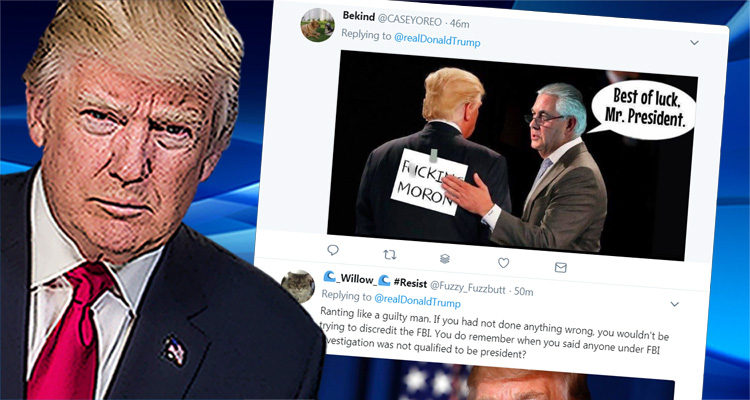 The news has been filled this week with reports detailing plans by the Republican Party to discredit former FBI Director James Comey prior to the release of his “tell-all” book on Tuesday.

The Republican party is rallying its army of surrogates to discredit former FBI Director James Comey as publication nears for his book recounting his tumultuous tenure in President Donald Trump’s administration.

The Republican National Committee circulated a set of talking points to prominent supporters on Thursday, including claims that Comey damaged the FBI’s reputation, leaked agency documents to the press after being fired, and that he was widely criticized by Democrats, many of whom had called for his resignation…

The party committee also activated a website, “Lyin’ Comey,” featuring quotes from prominent Democrats who have criticized the former FBI director in the past.

As it turns out, the bomb dropped early, with The New York Times and The Washington Post receiving advance copies of the book. Both newspapers published excerpts from the book on Thursday, prompting the expected backlash from Trump Friday morning in the form of a Twitter-Tantrum.

“James Comey is a proven LEAKER & LIAR. Virtually everyone in Washington thought he should be fired for the terrible job he did-until he was, in fact, fired. He leaked CLASSIFIED information, for which he should be prosecuted. He lied to Congress under OATH. He is a weak and…..” he began.

Taking a full 16-minutes, he finally completed his post, angrily tweeting: “….untruthful slime ball who was, as time has proven, a terrible Director of the FBI. His handling of the Crooked Hillary Clinton case, and the events surrounding it, will go down as one of the worst “botch jobs” of history. It was my great honor to fire James Comey!”

In fact, Comey did not leak classified information, but rather leaked out a memo that he wrote about his interactions with Trump in which Trump asked the former FBI director for his personal loyalty. As the Washington Post explains, this specific memo contained no classified material.

Twitter exploded almost immediately, with hilarity at times and somber reflection at other moments.

Former federal prosecutor Renato Mariotti weighed, in tweeting: “If Comey leaked classified information or lied under oath, he will be prosecuted. But there is no evidence that he did either one.”

If Comey leaked classified information or lied under oath, he will be prosecuted. But there is no evidence that he did either one.

That was quickly followed up by another tweet, adding: “Also worth noting that Trump is going to pardon Scooter Libby, who committed perjury and obstruction of justice relating to the leak of a CIA agent’s identity. Double standard?”

Also worth noting that Trump is going to pardon Scooter Libby, who committed perjury and obstruction of justice relating to the leak of a CIA agent’s identity. Double standard?

Crazy “Tea Party Joe” Walsh weighed in, responding to a Tweet by Jake Tapper announcing the start of Trump’s Twitter-Tantrum.

The President blocked me on Twitter, but let me guess: "Comey is a liar and a leaker. He deserved to be fired. He deserves to be in jail. His book is fake news."

One of our favorite responses alluded to reports that Trump fathered a love-child with a Trump Tower housekeeper. [See this great article by Vox for all the details.]

"Son?"
"Yes mom?"
"I have something to tell you. About your real dad."
"What?"
"You know how you're kinda not very bright but super confident? And racist? And you treat women like shit? And you have that crazy hair?"
"Yeah?"
"Well, back in the 80s I worked as a housekeeper…"