New lines were drawn in the battle between Stormy Daniels’ legal case and Trump when he took to his Twitter Wednesday morning further complicating his legal troubles.

“A sketch years later about a nonexistent man. A total con job, playing the Fake News Media for Fools (but they know it)!” Trump tweeted in response to a tweet by an individual who suggested that the man in the sketch released by Stormy Daniels’ legal team was an ex-boyfriend. 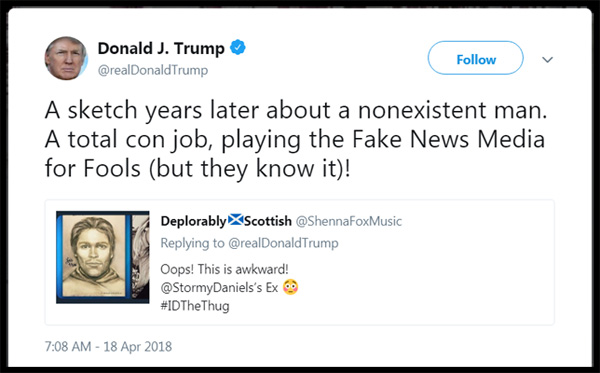 “In my experience, there is nothing better in litigation than having a completely unhinged, undisciplined opponent who is prone to shooting himself in the foot. Always leads to BIGLY problems…like new claims (i.e. defamation),” he tweeted minutes later.

In my experience, there is nothing better in litigation than having a completely unhinged, undisciplined opponent who is prone to shooting himself in the foot. Always leads to BIGLY problems…like new claims (i.e. defamation). LOL. #xmas #hanukkah #basta

The Washington Post reported that Daniels “sharply defended her credibility” while releasing the sketch of a man she says threatened her years ago during a Tuesday morning appearance on The View with Avenatti.

Daniels’s story about a man threatening her in a Las Vegas parking lot in 2011, which she first disclosed during a widely seen “60 Minutes” interview, prompted quick pushback from the president and Michael Cohen, his personal attorney, who in 2016 negotiated the $130,000 settlement with Daniels requiring her silence.

During an appearance Tuesday on ABC’s “The View,” Daniels and her attorney, Michael J. Avenatti, made public a sketch of the man she said approached her shortly after she sought to sell her story about a brief affair with Trump to a tabloid magazine.

Daniels and Avenatti initially offered a $100,000 reward for information leading to the positive identification of the man that threatened Ms. Clifford in Las Vegas, but later upped that reward to $131,000.

That figure parallels the $130,000 Trump’s personal attorney Michael Cohen says he paid Daniels in 2016 weeks before the election.

Cohen has admitted he paid Daniels $130,000 in 2016, just weeks before the election. In a statement to ABC News in February, Cohen said it was a private transaction using his “own personal funds” that were paid to Stephanie Clifford, Daniels’ legal name.

That payment was part of a non-disclosure agreement, and Trump’s legal team filed legal papers in March saying that she has violated the terms of that agreement at least 20 times, which would amount to $20 million in damages based on the agreement’s $1 million penalty clause.

The New York Daily News reported on the Twitter battle between Trump and Avenatti, reporting that:

FBI agents raided Cohen’s office and residences last week, and are believed to have looked for files on the hush agreement — made just days before the 2016 election.

Cohen predicted during a Tuesday appearance on MSNBC’s “Morning Joe” that Cohen would be facing criminal charges within the next 90 days and would eventually flip on Trump.

Asked by Showtime‘s “The Circus” host John Heilemann why he thought Cohen would flip on Trump.

“I think this investigation has taken on an enormous amount of momentum, I think the amount of information that was obtained [in the raid on Cohen’s office] was significant,” Avenatti said, adding that: “From what I’ve heard, from what I’ve seen, there is no question Michael Cohen is going to be charged. It is only a question of when, and I think it is going to happen in the next 90 days.”

Continuing, Avenatti stated that: “The likelihood of him not rolling over is very, very slim. I can’t imagine he’s going to go to trial, potentially face 10, 20, 25 years in a federal penitentiary for anybody, let alone a guy, Donald Trump, who left him behind when he went to Washington D.C. Don’t forget that Michael Cohen was supposedly his right-hand fixer, and when Donald Trump was finally elected he blew Michael Cohen off.”

Avenatti responded: “You think Michael Cohen’s wife is going to advise him to take a 20-year bullet for the president? I doubt it.”