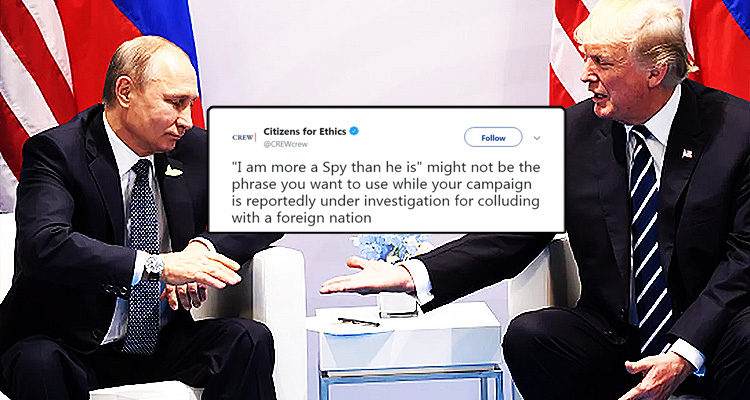 White House staff has been on pins and needles at the proposition of Trump spending a week a Mar-a-Logo alone with his thoughts, Fox News, and Twitter.

Trump is spending this week at his Mar-a-Lago Resort in Palm Beach, Florida where he welcomed Japanese Prime Minister Shinzo Abe on Tuesday.

Vanity Fair reported that Trump’s advisers are worried about his mental health, fearing that “five days in Florida will give the president too much television time, alone with his thoughts and his Twitter.”

Privately, however, White House advisers are worried that five days in Florida will give Trump too much time to brood over Mueller, Russia, and the swirl of scandals now involving Cohen. “Someone should say a prayer for Sarah [Huckabee Sanders], Mercy [Schlapp], and Raj [Shah] because rest assured, Mar-a-Lago is the last place they want the president spending his time this week,” one person close to the White House told Politico. “They have a lot of clean-up duty ahead of them.”

According to Politico, “there were all manners of triggers that could set the president off.”

Trump’s personal lawyer, Michael Cohen again appeared in court under the cloud of a federal criminal investigation. Fox News host Sean Hannity, Trump’s friend and frequent confidant, was named as one of Cohen’s clients during the court proceedings. Reporters from The Washington Post and The New York Times, which Trump has regularly lambasted on Twitter, won Pulitzer prizes for their coverage of Russia’s interference in the 2016 election. And Trump had to walk back a pledge by his ambassador to the United Nations to impose new sanctions on Moscow.

Even before he departed for Mar-a-Lago on Monday, Trump was fuming over former FBI Director James Comey’s new book and the ongoing criminal investigation into Cohen. Five days at Mar-a-Lago, where he often spends even more time watching cable news and talking to friends, could send his frustrations to new heights.

In one bizarre post, he tweeted: “Pastor Andrew Brunson, a fine gentleman and Christian leader in the United States, is on trial and being persecuted in Turkey for no reason. They call him a Spy, but I am more a Spy than he is. Hopefully he will be allowed to come home to his beautiful family where he belongs!” Certainly an odd tweet considering the ever-expanding scope of Robert Mueller’s investigation into possible collusion between Trump and Russia.

The New York Times provided background on the tweet, reporting that:

Brunson, a 50-year-old evangelical pastor from North Carolina, faces up to 35 years in prison. Brunson denies any wrongdoing. The State Department has said Brunson’s case was being watched closely by “the entire U.S. government.”

As we have come to expect, Twitter was quick to respond – at times with somber reflection and at others with hilarity.

Below is a sampling of a few favorites.

One of the very first responses came from Walter Shaub who served as the Director of the United States Office of Government Ethics from January 9, 2013 to July 19, 2017.

You’re more a Spy than he is?

Apparently stunned by the tweet, U.S. ethics and accountability organization CREW (Citizens for Responsibility and Ethics in Washington) offered a little piece of advice.

“I am more a Spy than he is” might not be the phrase you want to use while your campaign is reportedly under investigation for colluding with a foreign nation,” they tweeted.

"I am more a Spy than he is" might not be the phrase you want to use while your campaign is reportedly under investigation for colluding with a foreign nation https://t.co/J2fb7GHD9i

Finally. The Trump confession. In writing. "I am more of a Spy than he is." https://t.co/TUkHJ6jIol

A few other favorite tweets with images included:

"…but I am more a Spy than he is." Did I read that right? Our #POTUS is the most tone deaf person on Earth.

It would be like Bashar al-Assad tweeting that his favorite band is "My Chemical Romance."#MuellerInvestigation pic.twitter.com/PKEMFkqsYR

A Russian spy living in the WH. pic.twitter.com/iRhTvYdwkz