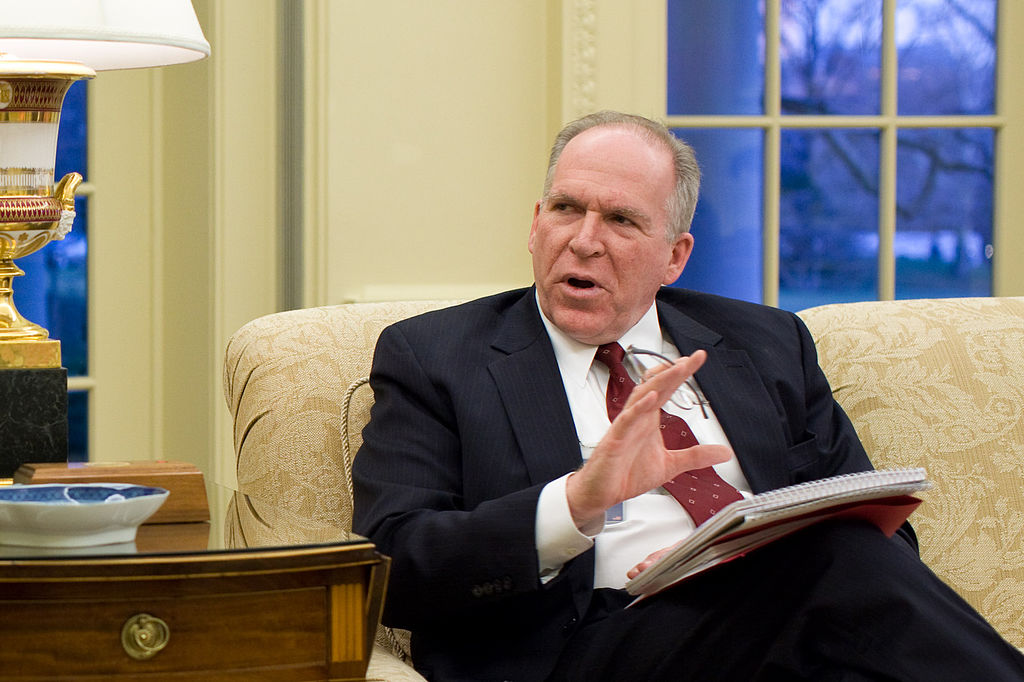 John Brennan, President Obama’s former CIA director, took to his Twitter account this weekend issuing a stern warning to Ryan and McConnell about their complacency in the wake of Trump’s weekend tantrum.

John Brennan doesn’t mince words when it comes to what he thinks about Trump, and this week was no exception.

In the wake of a week filled with disastrous revelations, Trump pitched another one of his now-infamous Twitter tantrums on Sunday.

“I hereby demand, and will do so officially tomorrow, that the Department of Justice look into whether or not the FBI/DOJ infiltrated or surveilled the Trump Campaign for Political Purposes – and if any such demands or requests were made by people within the Obama Administration!” was the final installation of the 8-tweet fit.

I hereby demand, and will do so officially tomorrow, that the Department of Justice look into whether or not the FBI/DOJ infiltrated or surveilled the Trump Campaign for Political Purposes – and if any such demands or requests were made by people within the Obama Administration!

Brennan responded roughly three hours later, tweeting: “Senator McConnell & Speaker Ryan: If Mr. Trump continues along this disastrous path, you will bear major responsibility for the harm done to our democracy. You do a great disservice to our Nation & the Republican Party if you continue to enable Mr. Trump’s self-serving actions.”

Senator McConnell & Speaker Ryan: If Mr. Trump continues along this disastrous path, you will bear major responsibility for the harm done to our democracy. You do a great disservice to our Nation & the Republican Party if you continue to enable Mr. Trump’s self-serving actions. https://t.co/uAhgL6wfIC

Indeed, as The New York Times reported, there was cause for alarm.

Trump on Sunday demanded that the Justice Department investigate whether the department or the F.B.I. “infiltrated or surveilled” his campaign at the behest of the Obama administration, following through on his frequent threats to intervene in the special counsel inquiry as he targets those he views as political enemies.

But in ordering up a new inquiry, Mr. Trump went beyond his usual tactics of suggesting wrongdoing and political bias by those investigating him, and crossed over into applying overt presidential pressure on the Justice Department to do his bidding, an extraordinary realm where past presidents have hesitated to tread.

Legal experts said such a presidential intervention had little precedent, and could force a clash between the sitting president and his Justice Department that would be reminiscent of the one surrounding Richard M. Nixon during Watergate, when a string of top officials resigned rather than carry out his order to fire a special prosecutor investigating him.

As The Washington Post reported, calmer heads prevailed – at least for now.

Hours later, the Justice Department responded by saying it had asked its inspector general to expand an ongoing review of the applications to monitor a former Trump campaign adviser “to include determining whether there was any impropriety or political motivation in how the FBI conducted its counterintelligence investigation of persons suspected of involvement with the Russian agents who interfered in the 2016 presidential election.”

“If anyone did infiltrate or surveil participants in a presidential campaign for inappropriate purposes, we need to know about it and take appropriate action,” Deputy Attorney General Rod J. Rosenstein said in a statement.

However, there is no reason to dismiss Brennan’s warning or to let Ryan or McConnell off the hook – even though this potential constitutional crisis appears to have been averted for now.

As Slate reported over the weekend, there is plenty to hold Ryan and other Republicans accountable for in their dismissive attitude about Trump’s alleged crimes.

Ryan’s last year in office is proving disastrous, a fitting end to the speakership of a man once considered a principled conservative reformer. His refusal to fulfill his constitutional role as leader of the House but rather play the role of presidential poodle and Republican attack dog for his increasingly unhinged caucus has had dire consequences for the GOP House majority, the intelligence oversight process and the broader conservative movement.

For his part, Trump did what he typically does, he launched a vicious attack on Brennan first thing Monday morning on Twitter, quoting Dan Bongino,  a former U.S. Secret Service agent, frequent Fox News commentator, and would- be politician who has lost two bids for the House of Representatives and one for the Senate.

John Brennan is panicking. He has disgraced himself, he has disgraced the Country, he has disgraced the entire Intelligence Community. He is the one man who is largely responsible for the destruction of American’s faith in the Intelligence Community and in some people at the top of the FBI. Brennan started this entire debacle about President Trump. We now know that Brennan had detailed knowledge of the (phony) Dossier…he knows about the Dossier, he denies knowledge of the Dossier, he briefs the Gang of 8 on the Hill about the Dossier, which they then used to start an investigation about Trump. It is that simple. This guy is the genesis of this whole Debacle. This was a Political hit job, this was not an Intelligence Investigation. Brennan has disgraced himself, he’s worried about staying out of Jail.” ~ Dan Bongino

The document Trump mentions is the infamous Christopher Steele dossier, which included lurid allegations that Russia has recordings of the president engaged in an obscene act with prostitutes in Moscow.

Brennan, who ran the CIA from 2003 to January 2017, has been an outspoken critic of Trump, and has said he believes it is plausible that Russia could have compromising material on the president.