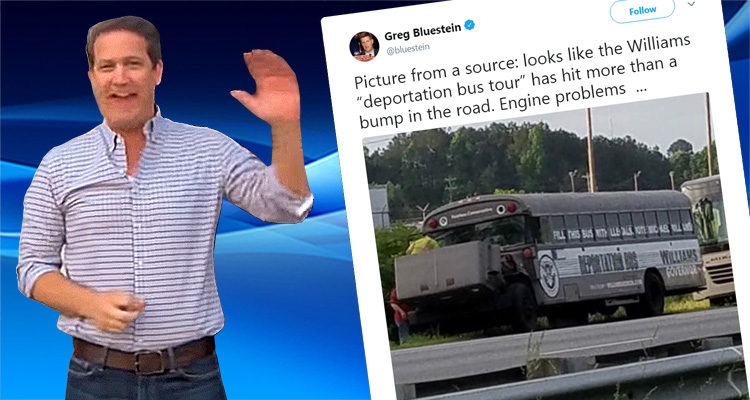 Republican Michael Williams is polling last place in Georgia’s GOP gubernatorial primary, and in a hilarious turn for the worst, his Deportation Bus Tour appears to be having a little trouble – just like his campaign.

The media has been buzzing the last few days over the launch of a Georgia gubernatorial candidate’s “Deportation Bus Tour.”

Michael Williams, a Republican candidate for governor of Georgia, is championing anti-immigration rhetoric with a “deportation bus tour” ahead of the state’s May 22 primary elections. The self-described “fearless conservative” has been on a political bus tour in recent days where his campaign touts a gray school bus with the words “Fill this bus with illegals.”

In a 58-second advertisement released Tuesday, Williams stands in front of the “deportation bus” and shares his campaign promise to “fill this bus with illegals and send them back from where they came from.” The rhetoric matches the campaign style of Donald Trump, who called citizens of Mexico “drug dealers, criminals, and rapists” in his first-ever campaign speech. Written on his campaign bus, Williams refers to undocumented immigrants as “murderers, rapists, kidnappers, child molesters, and criminals” on the rear of the bus, just above a call to elect him governor.

Elaborating on the scope of the tour, NPR reported that: “Williams has labeled the stops on his tour ‘sanctuary cities,’ though they officially aren’t. In 2009, state legislators passed a law banning sanctuary cities in Georgia. The ‘deportation bus’ tour is set to make 27 stops around Georgia until the day before the primary on May 22.”

However, as The Atlanta Journal-Constitution reported, just like his campaign, Williams’ tour hit an unexpected snag.

Williams’ “deportation bus tour” hit some speed bumps Thursday in a quest for attention and outrage in the closing days of the primary for governor.

The grey-painted vehicle, emblazoned with “fill this bus with illegals,” broke down early Thursday in between stops in north Georgia. Critics took to social media to compare the sputtering engine’s plight to his longshot bid for governor.

And that isn’t the first snag in his tour – thankfully.

Atlanta local news station WSB-TV reported that: “After a stop in Decatur, which is at the center of an ongoing feud with Cagle over immigration policy, Williams’ campaign manager claimed ‘radical liberals’ blocked the bus from leaving, shoved staffers and attempted to deface the bus.”

However, “DeKalb County police issued a statement late Wednesday that said multiple officers on the scene ‘did not observe any violence or criminal activity’ and said Williams has failed to back up his claim.”

The restaurant chain Cracker Barrel, meanwhile, notified Williams that his bus was prohibited from campaigning outside its restaurants, citing a policy not to host political events. Several stops on the bus tour were to take place at the restaurant’s locations.

“We are not sponsoring this event or supporting Mr. Williams’ campaign stops in any way, and per our company policy, we will not allow him – or any political candidate – to host an event on Cracker Barrel’s property,” the restaurant said in a statement.

“We take pride in showing our communities and our country that the hospitality we practice is indeed welcoming and inclusive to all.”