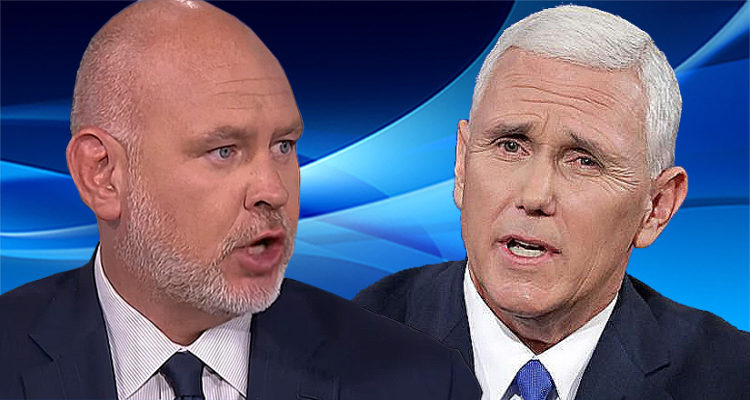 Pence gets shredded for the second time in as many days. This time by GOP Strategist Steve Schmidt.

Conservative commentator and former Fox News contributor George Will was the first to blast Pence in a Wednesday opinion piece for The Washington Post, proclaiming that “Trump is no longer the worst person in government,” that Pence has “become America’s most repulsive public figure.”

Thursday morning Pence sat down with NBC‘s Andrea Mitchell, where he urged Special Prosecutor Robert Mueller to end his investigation.

“What I think is that it’s been about a year since this investigation began,” Pence stated. “Our administration has provided over a million documents. We’ve fully cooperated in it. And in the interest of the country, I think it’s time to wrap it up. I would very respectfully encourage the special counsel and his team to bring their work to completion.”

Trump is what he is, a floundering, inarticulate jumble of gnawing insecurities and not-at-all compensating vanities, which is pathetic. Pence is what he has chosen to be, which is horrifying.

Schmidt start ripping at Pence immediately, stating: that “[Pence] is a titanic, and I mean titanic fraud.”

We’ve listened to this guy for many many years in this country on his moral high horse – assaulting the dignity of gay people, across the board. His moral preening is famous throughout the land.

Yet, he is the most obsequious of all of Trump’s cultists in the cabinet. There have been occasions, as George Will points out, where speaking of Trump in front of Trump where Mike Pence compliments him on an average every 3.2 seconds.

We have never seen such slobbering servility by a high government official in this country than we do with Mike Pence and Donald Trump. It is amazing.

Wallace followed up by asking Schmidt if he thought the people around Pence were preparing him for “any scenario where Vice President Pence becomes President Pence.”

I wonder if they have any concept of the weakness that oozes out of this guy with his obsequiousness. He just projects weakness – his faux sincerity there, squinting into the camera – his voice modulated and low – ‘it’s time to end the investigation.’

All the while the president who he serves, and again, he’s supposed to be serving the American people, he’s the vice president of the United States – but instead he acts like the house butler at Mar-a-Lago.

Again the non-stop assault on our institutions, the Justice Department, the rule of law, chants of ‘lock her up,’ ‘lock them up,’ the call for it and the assault on the former FBI director James Comey and not least Robert Mueller a combat Marine veteran, decorated for valor, a person known all across this country and through his professional life for his integrity.