Owners Of Mugshot.com Receive A Dose Of Their Own Medicine 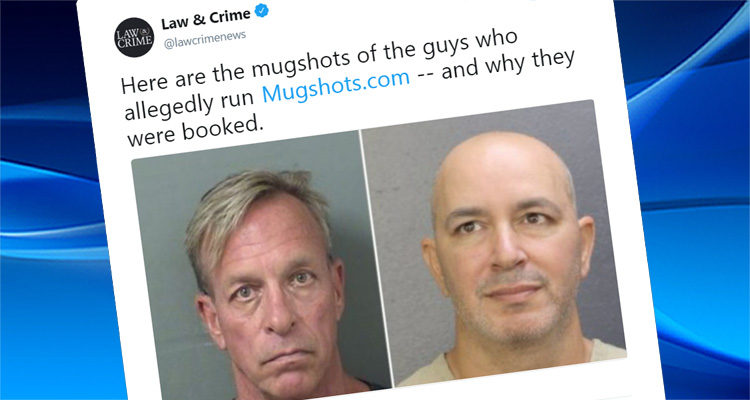 The owners of MugShots.com got served up a healthy dose of karma last week thanks to the efforts of California’s Attorney General.

The arrests of Thomas Keesee, of West Palm Beach, and Sahar Sarid, of Lighthouse Point, on Wednesday come as part of an effort by the California Attorney General’s Office to pursue criminal charges against for individuals behind the “cyber exploitation website.” Two other owners, Kishore Vidya Bhavnanie and David Usdan, have also been charged.

Keesee was booked into the Palm Beach County Jail and Sarid was booked into the Broward County Jail on May 16, jail records show…. The California AG’s Office worked with the Florida Department of Law Enforcement, the Broward County Sheriff’s Office, Palm Beach County Sheriff’s Office, and Connecticut and Pennsylvania authorities to arrest the four owners. California is seeking their extradition and will prosecute the case.

The State of California Department of Justice issued a press release last Wednesday announcing the arrest, stating in part:

California Attorney General Xavier Becerra today announced charges of extortion, money laundering, and identity theft against four defendants who are allegedly behind the exploitative website Mugshots.com. The website mines data from police and sheriffs’ department websites to collect individuals’ names, booking photos and charges, then republishes the information online without the individuals’ knowledge or consent. Once subjects request that their booking photos be removed, they are routed to a secondary website called Unpublisharrest.com and charged a “de-publishing” fee to have the content removed. Mugshots.com does not remove criminal record information until a subject pays the fee. This is the case even if the subject had charges dismissed or had been arrested due to mistaken identity or law enforcement error. Those subjects who cannot pay the fee may subsequently be denied housing, employment, or other opportunities because their booking photo is readily available on the internet.

The defendants named in the complaint are Sahar Sarid, Kishore Vidya Bhavnanie, Thomas Keesee, and David Usdan. They are the alleged owners and operators of Mugshots.com. Over a three-year period, the defendants extracted more than $64,000 in removal fees from approximately 175 individuals with billing addresses in California. Nationally, the defendants took more than $2 million in removal fees from approximately 5,703 individuals for the same period.

AG Becerra had this to say about the actions of Mugshots.com:

This pay-for-removal scheme attempts to profit off of someone else’s humiliation. Those who can’t afford to pay into this scheme to have their information removed pay the price when they look for a job, housing, or try to build relationships with others. This is exploitation, plain and simple.

British tabloid, The Daily Mail reported that the the arrestees have now received a “dose of their own medicine!”

They made millions off publishing mugshots online, demanding exorbitant removal fees from their subjects. Now the mugs of Sahar Sarid and Thomas Keesee, two of the four alleged owners of Mugshots.com, are circulating the internet after they were arrested on charges of extortion, money laundering and identity theft.

https://t.co/Thdh077SaD puts people's mugshots online, and then demands payment to take them down. The site's founders were just arrested for extortion. Here are their mugshots. pic.twitter.com/gIKwCKHrxU

Here are the mugshots of the guys who allegedly run https://t.co/BfW3P44l8F — and why they were booked. The story: https://t.co/FDsf0bH1NL pic.twitter.com/MoF1YqFAd2