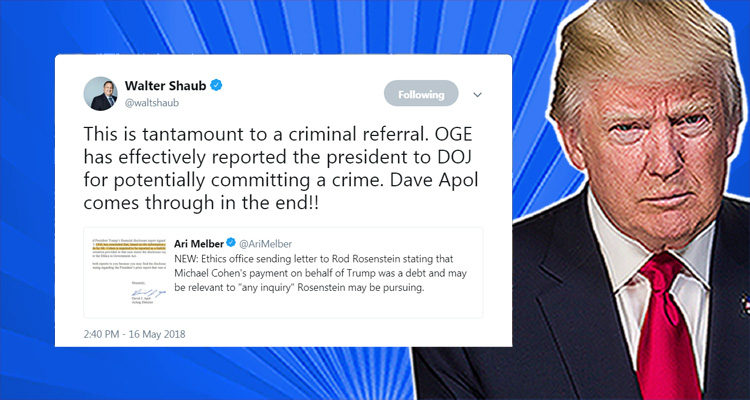 Mr. Cohen has said he made the payment to keep the actress, who goes by the stage name Stormy Daniels, from going public before the 2016 election with her story about an affair with Mr. Trump.

A footnote in the disclosure said that Mr. Cohen had requested reimbursement of the expenses incurred in 2016 and Mr. Trump had repaid it in full in 2017. It did not give an exact amount of the payment but said it was between $100,001 and $250,000.

However, the payment was not revealed in that filing. The OGE’s acting director on Wednesday gave the Justice Department both this year’s report and last year’s report “because you may find the disclosure relevant to any inquiry you may be pursuing.”

CBS News elaborated on the response by the Office of Government Ethics, reporting:

The head of the Office of Government Ethics (OGE) flagged that discrepancy to deputy Attorney General Rod Rosenstein in case it is “relevant to any inquiry you may be pursuing.”

“In the interest of transparency, while not required to be disclosed as ‘reportable liabilities’ on Part 8, in 2016 expenses were incurred by one of Donald J. Trump’s attorneys, Michael Cohen. Mr. Cohen sought reimbursement of those expenses and Mr. Trump fully reimbursed Mr. Cohen in 2017. The category of the value would be $100,001 – $250,000 and the interest rate would be zero,” a footnote in the president’s financial disclosure form reads.

David Apol, the acting director of the Office of Government Ethics, sent a letter to Deputy Attorney General Rod Rosenstein Wednesday, saying that, “based on the information provided as a note … the payment made by Mr. Cohen is required to be reported as a liability.” Apol wrote to Rosenstein and provided him with those financial disclosure reports, “because you may find the disclosure relevant to any inquiry you may be pursuing regarding the president’s prior report.”

NEW: Ethics office sending letter to Rod Rosenstein stating that Michael Cohen's payment on behalf of Trump was a debt and may be relevant to "any inquiry" Rosenstein may be pursuing. pic.twitter.com/e22Jfuozic

This is tantamount to a criminal referral. OGE has effectively reported the president to DOJ for potentially committing a crime. Dave Apol comes through in the end!! https://t.co/8LhDQZS8pF