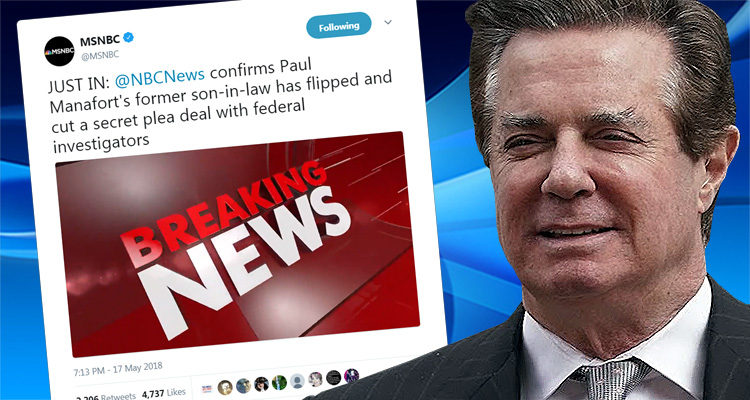 Just in: Reuters reports that Paul Manafort’s former son-in-law cut a plea deal and is now cooperating with federal investigators.

Reuters is reporting tonight that: “The former son-in-law of Paul Manafort, the one-time chairman of President Donald Trump’s campaign, has cut a plea deal with the Justice Department that requires him to cooperate with other criminal probes, two people with knowledge of the matter said.”

The guilty plea agreement, which is under seal and has not been previously reported, could add to the legal pressure on Manafort, who is facing two indictments brought by Special Counsel Robert Mueller in his probe of alleged Russian meddling in the 2016 presidential election.

Manafort has been indicted in federal courts in Washington and Virginia with charges ranging from tax evasion to bank fraud and has pleaded not guilty to the charges.

CBS News reported on the plea agreement, adding that:

Manafort has been indicted on charges including bank fraud and tax evasion in federal courts in Washington, D.C., and Virginia, charges stemming from special counsel Robert Mueller’s probe into Russian election meddling and any ties to Trump associates.

One of Manafort’s longtime associates, Rick Gates, has already pleaded guilty to charges stemming from Mueller’s probe. Gates pleaded guilty in February on charges of conspiring against the U.S. and making false statements to the federal government. He is, CBS News correspondent Paula Reid has reported, cooperating with the special counsel as a part of his plea deal, and his deal is contingent on his cooperation and testimony.

You can watch a news clip, below from MSNBC: