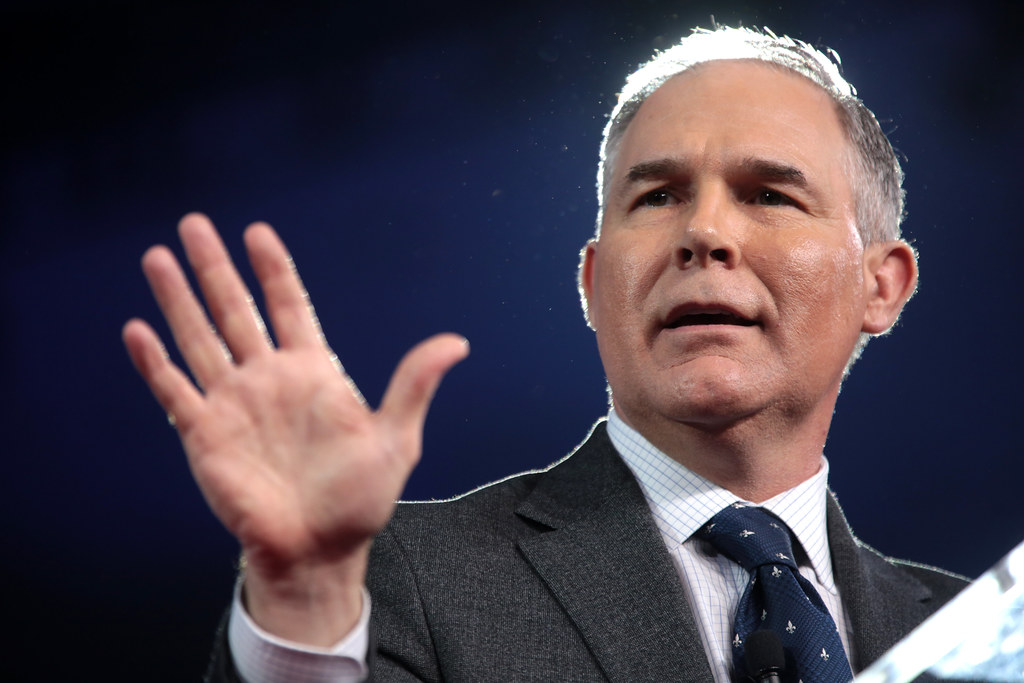 “This is red alert – not normal – not in a democracy!” ~Amy Siskind

Slate reported on Tuesday that: “After months of unceasing scandal, Environmental Protection Agency Administrator Scott Pruitt, before Tuesday, could have been fairly described as the worst, most corrupt member of President Donald Trump’s Cabinet. Now he can claim a new title: most thuggish member of Trump’s cabinet.

The EPA banned reporters from AP, CNN, and environmental-focused news organization E&E from attending a national summit on harmful water contaminants on Tuesday, violently ejecting a reporter from the Associated Press.

The Associated Press elaborated on the situation reporting that:

The EPA blocked the news organizations from attending Tuesday’s Washington meeting, convened by EPA chief Scott Pruitt. EPA spokesman Jahan Wilcox told the barred organizations they were not invited and there was no space for them, but gave no indication of why they specifically were barred.

Guards barred an AP reporter from passing through a security checkpoint inside the building. When the reporter asked to speak to an EPA public-affairs person, the security guards grabbed the reporter by the shoulders and shoved her forcibly out of the EPA building.

Slate added that: “It’s unclear at this time why Pruitt’s government-sponsored goons went after these specific news organizations, but it might have something to do with their coverage of his bald-faced public corruption and his near-daily assaults on the environmental safety he was sworn to protect.”

The Guardian reported that this appears to be the latest move by Pruitt’s EPA to throttle information regarding contaminants.

According to The Guardian report: “today’s incident was the latest incident to dog Pruitt’s time as head of the EPA in the Trump administration.”

He drew scrutiny from lawmakers earlier this month after EPA emails were released showing that the agency had intervened in the publication of a new government study on certain contaminants.

Politico reported that the EPA and the White House sought to block publication of a federal health study on a nationwide water-contamination crisis.

The relevant chemicals are perfluoroalkyl and polyfluoroalkyl, which are used in some nonstick coatings, in firefighting foam and elsewhere. The chemicals can cause developmental defects and some other serious health problems and the authorities say the contaminants are present in dangerous levels in some water systems, including several near military bases and industrial sites.

Pruitt drew questions from both sides of the aisle last week after emails obtained under the Freedom of Information Act revealed an unidentified White House official calling a pending federal toxicological report on the chemical problem a “potential public-relations nightmare”.

The emails also revealed EPA officials intervening in the release of the study, which remains unpublished.

Amy Siskind, a national spokesperson for women’s rights and frequent source for The New York Times, The Wall Street Journal, and The Washington Post reacted to the news, tweeting: “This is red alert – not normal – not in a democracy!”

This is also not normal:
"When the reporter asked to speak to an EPA public-affairs person, the security guards grabbed the reporter by the shoulders and shoved her forcibly out of the EPA building."