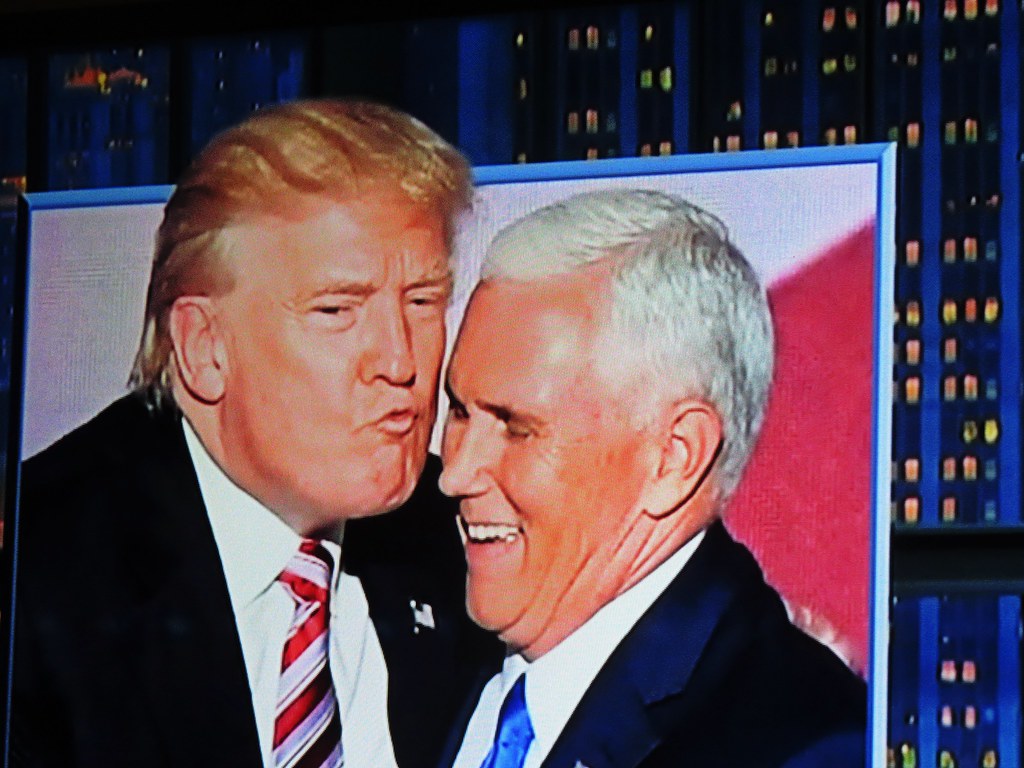 It appears that Rudy Giuliani has left Trump no choice but to hope that Mike Pence opts to pull a Gerald Ford and save his ass from a potentially long prison term.

The concept of synchronicity, first introduced by the noted Swiss psychiatrist and analytical psychologist, Carl Jung, holds that events are “meaningful coincidences” if they occur with no causal relationship yet seem to be meaningfully related.

That idea came barreling into my life today when I happened across an image of Trump attempting to kiss Mike Pence after his speech at the Republican National Convention in Cleveland on July 20, 2016.

It just so happens that I had just finished reading an article in The Washington Post titled: “The truth is about to catch up to Trump. He has Giuliani to thank for it.”

The article began noting that:

Today [Tuesday, May 15, 2018] is the deadline for President Trump to file his financial disclosure form for 2017. That fact may seem trivially bureaucratic, but lurking at its core is a dilemma for Trump that continues to metastasize into something ever more grotesque.

The need to submit this form shows that, in the Stormy Daniels matter, Trump has been boxed in by his lawyer (sic) Rudy Giuliani — and by his own tweets — with no good way out.

Continuing, The Washington Post arrived at the heart of the matter:

Here’s the problem for Trump: He needs to decide whether to disclose the debt he incurred to his personal lawyer, Michael Cohen, when Cohen paid $130,000 to Daniels just before the election, buying her silence about their alleged affair. Trump did not disclose this debt in the financial disclosure form he filed one year ago — back when this payment, and Trump’s reimbursement of it, remained unknown.

But thanks to Giuliani, we now know that Trump did, in fact, incur this debt to Cohen…. Trump is in the awkward position of deciding what to say about his liability to Cohen on his financial disclosure form. “He has to disclose any liability he had over $10,000 at any point in 2017,” Noah Bookbinder, the executive director of Citizens for Responsibility and Ethics in Washington, [said] this morning.

And for the coup de grâce:

Helpfully enough, Giuliani has also laid out to BuzzFeed a detailed timeline of Trump’s payments, acknowledging that Trump agreed to give Cohen $35,000 per month starting early in 2017, which continued throughout the year. “This was a liability of well over $10,000 through much if not all of 2017,” Bookbinder told me.

Thanks to Giuliani, Trump’s excuse for not disclosing this liability has now evaporated.

After reading that article, I immediately thought to myself that there is no way Trump is going to wiggle out of this one — that in the end, President Mike Pence [provided he isn’t impeached or indicted first] is going to have the option to either save Trump through the power of a presidential pardon or condemn him by turning his back.

And to be clear, Democratic Representative Ted Lieu of California weighed in at the time of Giuliani’s admission, tweeting: “Here’s a fun fact: campaign finance law violations over $25k are felonies. The in-kind contribution of $130k to Stormy Daniels was over that line. The reimbursement constitutes a separate crime of covering up the true source of a contribution. Also likely banking law violations.”

Here's a fun fact: campaign finance law violations over $25k are felonies. The in kind contribution of $130k to Stormy Daniels was over that line. The reimbursement constitutes a separate crime of covering up the true source of a contribution. Also likely banking law violations. https://t.co/H5wydrGL05

Norm Eisen, a Senior Fellow at the Brookings Institute, CNN commentator, and Chairman of CREW ( Citizens for Responsibility and Ethics in Washington), weighed in as well, tweeting: “Whoa, Rudy may just have proven our @CREWcrew complaint that Trump broke the law by failing to disclose the loan from Cohen on his federal presidential financial disclosures. Those are filed under criminal penalty for false statements, 18 USC 1001.”

Ted Lieu followed-up, replying that there were “4 possible felonies” from Rudy Giuliani admission:

[Noah Bookbinder, the executive director of Citizens for Responsibility and Ethics in Washington] points out… that the amount of debt Trump acknowledges to Cohen — if, say, he notes liabilities that are well in excess of $130,000 — will raise additional questions…

“He’s going to have to check a box that will give us a ballpark” for his liabilities to Cohen, Bookbinder says. “That will tell us a lot about whether there were additional payments by Cohen to benefit the president.”

Of course, Trump could try to conceal such additional liabilities while only admitting to reimbursing the Daniels payment. But then he’d be lying on his financial disclosure form, and those payments (and liabilities) could subsequently come out, revealing Trump’s effort to conceal them. Trump could also try to find additional loopholes, such as claiming that the reimbursement was a campaign expenditure, which wouldn’t have to be noted. But as Walter Shaub and Adav Noti point out in a piece on this whole dilemma, Giuliani foreclosed that option, too, when he insisted that the payment was not campaign-related.

Trump could very well seek an extension of 30 days on his form. But he can’t outrun these facts forever. And hopefully, this will illustrate that there are limits on just how tangled Trump’s web of lies can grow before it finally traps him.