" /> That Time A Group Of Immigrants Saved Ronald Reagan's Life 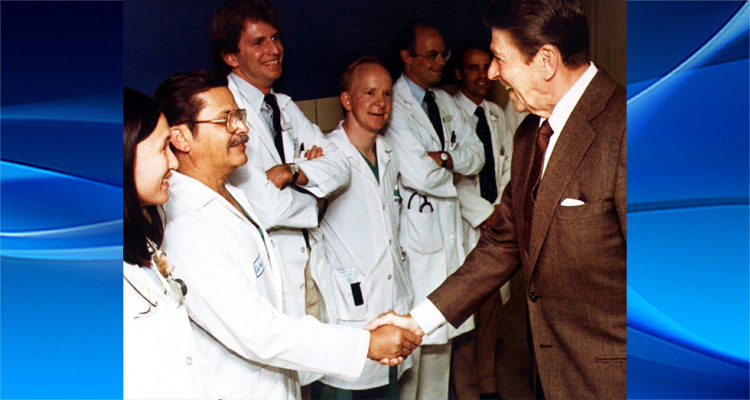 In the midst of anti-immigrant sentiment spewing from the White House, it is important to remember that a team of foreign-born doctors saved Ronald Reagan’s life.

Trump launched his campaign accusing Mexico of “bringing their worst people” to the United States, claiming “they’re bringing drugs, they’re bringing crime, they’re rapists, and some I assume are good people but I speak to border guards and they tell us what we are getting.”

A couple of weeks ago, Trump was called out for using a racist term during an attack on sanctuary cities complaining about immigrants “breeding.”

“There is a Revolution going on in California. Soooo many Sanctuary areas want OUT of this ridiculous, crime infested & breeding concept. Jerry Brown is trying to back out of the National Guard at the Border, but the people of the State are not happy. Want Security & Safety NOW!” he tweeted.

Trump has been the recipient of harsh criticism from global leaders such as Vicente Fox, the president of Mexico from 2000 to 2006, who doesn’t mince words when it comes to his dislike of Trump and his “f*cking wall.” Fox has targeted him almost continuously, with a series of videos denouncing Trump’s bigotry, on his Twitter page, and through television interviews.

Enda Kenny, the Irish prime minister, used his 2017 Saint Patrick’s Day meeting with Trump as an opportunity to lecture the bigoted billionaire about the contribution of Irish immigrant population in the United States.

The Washington Post published an article on Wednesday (May 2, 2018) telling the story about the time a group of immigrant doctors saved the life of Republican hero Ronald Reagan.

Thirty-seven years ago, Reagan became the first president to survive being shot while in office. He lived, it is believed, because of the expert care he received at George Washington University Hospital. Less widely known is that every doctor on Reagan’s anesthesia team was foreign-born.

Back on that terrifying March day in 1981, Secret Service agents scrambled into scrubs to guard the surgery. Doctors and support staff raced Reagan’s gurney to the operating room. Then they placed him in the hands of three immigrants for anesthesia.

“One thing really struck me, looking at our team,” recalled Manfred Lichtmann, a staff anesthesiologist at the hospital. “Each of us had emigrated to the United States.”

Morales, who died in 2003, came from Mexico. May Chin, then a resident at the hospital, was born in Malaysia. And Lichtmann had been a child refugee from Adolf Hitler’s Germany.

After discussing the merits of a more open-ended immigration policy than the Trump administration desires, The Washington Post offered the following, humorous, post-script to the story:

As the doctors at George Washington lifted the president to the operating table, Lichtmann recalled Reagan saying, “I presume you are all Republicans.” It was a quip, meant to reassure them. But it was also an acknowledgment that everyone there shared a clear, common purpose.

“We are all Republicans today, Mr. President,” the trauma chief answered.

It is also important to remember that Reagan granted amnesty to aliens as president, giving citizenship to over three million illegals living in the USA with the stroke of a pen, a position antithetical to the expressed wishes of the White House and current GOP ideology.

As NPR reminded the country in 2015 in the wake of Trump’s remarks about Mexico when he announced his campaign:

The law granted amnesty to nearly 3 million illegal immigrants, yet was largely considered unsuccessful, because the strict sanctions on employers were stripped out of the bill for passage.”

Last, but not least, there is this quote from the presidential debate between Reagan and former Vice President Walter F. Mondale in Kansas City, Missouri on October 21, 1984: