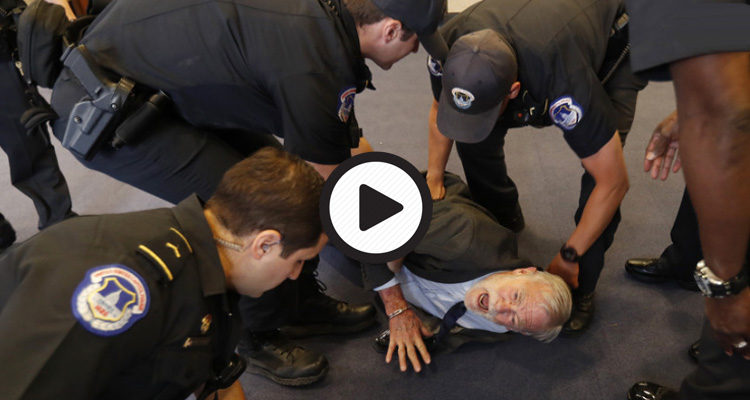 A video has been released of a former CIA operative being dragged out of Gina Haspel’s confirmation hearing and wrestled to the ground for protesting torture.

Vice News reported that McGovern, a 27-year veteran of the CIA, “used to brief Ronald Reagan every morning,” adding:

Former CIA operative turned activist Ray McGovern got up at the Wednesday hearing on Capitol Hill and demanded answers from Haspel, acting head of the CIA and President Trump’s nominee to replace Mike Pompeo as CIA chief. While she promised not to create another torture program, she also wouldn’t condemn the previous one, including what happened at a CIA black site in the years after 9/11. When McGovern spoke up, at least five Capitol Police officers quickly detained him, warned him to stop resisting, and threw him out of the hearing in front of the Senate Intelligence Committee.

Because [Gina Haspel] wasn’t giving any straight answers, Ray McGovern, a CIA veteran of 27 years and frequent contributor to Consortium News, stood up in the hearing room and began asking his own questions. Capitol police were immediately ordered by the chairman, Sen. Richard Burr (R-NC), to physically remove McGovern from the room. As he continued turning towards the committee to shout his questions, four officers hauled him out. They ominously accused him of resisting arrest. Once they got him into the hallway, rather than letting him go his way, four policemen wrestled him to the ground, re-injuring his dislocated left shoulder, as they attempted to cuff him.

After spending the night in jail, McGovern, 78, was to be arraigned on Thursday. He has not responded to several voice message left on his mobile phone. A police officer at Central Booking told Consortium News McGovern was no longer under their control and had been sent to court. According to DC Superior Court, he has been charged with Unlawful Disruption of Congress and Resisting Arrest. Ray returned home Thursday night.

Cell phone footage of the incident is making the rounds on social media.

Police can be heard in the clip repeatedly shouting at McGovern to “stop resisting,” as the 78-year-old told them over and over again that he had a dislocated shoulder.

A woman’s voice – presumably the person who recorded the incident – can be heard telling police to “stop hurting him” and telling them “you should be ashamed of yourselves.”

Twitter user Together We Rise posted the clip, tweeting: “Former CIA officer and whistleblower Ray McGovern was forcibly removed from Senate hearing, violently injured by police for protesting Trump’s CIA director nominee Gina Haspel. This is what America does to 78 year olds who dare to protest torture.”

The tweet ended with a one word request “Spread!” hoping that the clip would be widely shared to shed light on the behavior of D.C. police.

This is what America does to 78 year olds who dare to protest torture. Spread!pic.twitter.com/av25nRF9E6