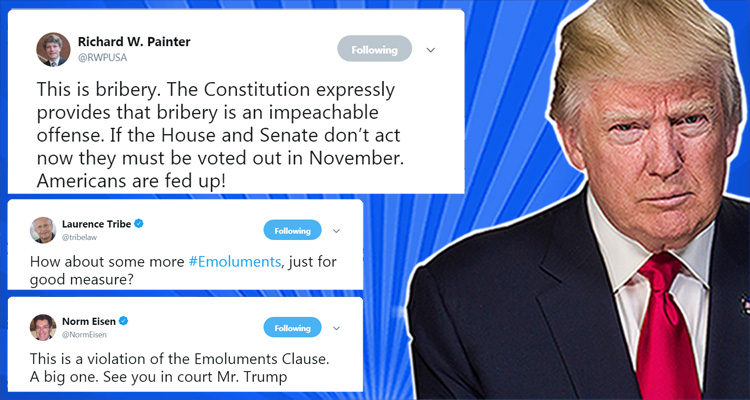 Trump appears to have committed a text-book example of accepting a bribe according to legal experts.

The issue at hand involves an inexplicable tweet posted by Trump on Sunday announcing that he was going to roll back his administration’s own sanctions on Chinese telecom company ZTE.

“President Xi of China, and I, are working together to give massive Chinese phone company, ZTE, a way to get back into business, fast. Too many jobs in China lost. Commerce Department has been instructed to get it done!” he tweeted.

President Xi of China, and I, are working together to give massive Chinese phone company, ZTE, a way to get back into business, fast. Too many jobs in China lost. Commerce Department has been instructed to get it done!

Among other things, people who voted for Trump did so because of his “America First” agenda and not to “Make China Great Again.”

First of all, I am pretty sure that white working-class voters preferred Donald Trump because they were concerned about jobs being lost to China. Indeed, if memory serves, many of these Trump voters were rather irate about China allegedly stealing American jobs. Trump himself got pretty worked up about this during the 2016 campaign.

There is also the sticky issue of the fact that the sanctions were well-placed based on international trade law violations committed by ZTE.

Second, even ardent free-traders like myself would acknowledge that the Trump administration had just cause to crack down on ZTE.  The Chinese firm admitted last year that it had violated U.S. trade sanctions on North Korea and Iran; it reached a settlement in which the firm agreed to pay criminal fines in excess of $800 million. Last month, however, the Commerce Department banned all sales by U.S. firms to ZTE for not complying with the 2017 deal. The Defense Department subsequently banned U.S. military bases from selling any ZTE devices because of the potential security risk they imposed.

Well, as it turns out, there is reason to belief that China bribed Trump.

Enter Richard W. Painter, Bush Jr’s ethics attorney, who tweeted: “This is bribery. The Constitution expressly provides that bribery is an impeachable offense. If the House and Senate don’t act now they must be voted out in November. Americans are fed up!”

This is bribery. The Constitution expressly provides that bribery is an impeachable offense. If the House and Senate don’t act now they must be voted out in November. Americans are fed up!https://t.co/DAnJhq7DoQ via @HuffPostPol

Painter’s tweet contained a link to an explosive article by Huffington Post that explained that “Trump will profit from Indonesian resort project that will get $500 million in Chinese loans in a deal sealed days before before his tweet ordering help for ZTE.”

His tweet included a link to an article by the South China Morning Post which reported that $500 million in Chinese government loans will support construction of a billion-dollar resort and theme park project featuring Trump-branded hotels and a golf course.

Referencing the Emoluments Clause from the U.S. Constitution, noted Harvard Law School professor Laurence Tribe weighed in on the matter, tweeting: “How about some more #Emoluments, just for good measure?” in response to Keller’s tweet.

How about some more #Emoluments, just for good measure? https://t.co/EkWUms41W8

For those unfamiliar with the term, the Emoluments Clause restricts members of the government from receiving gifts, emoluments, offices or titles from foreign states without the consent of the United States Congress.

Several other individuals picked up on the problems associated with Trump’s tweet. For instance, The Washington Examiner reported that:

Rep. Eric Swalwell, D-Calif., argued Tuesday that President Trump’s announcement that he wanted to work with China to save Chinese cell phone company ZTE was driven by money, and could therefore violate language in the Constitution that says officials can’t use their office for direct financial gain.

“It does seem like the simplest explanation is the correct one — it’s money,” Swalwell told CNN Tuesday morning when describing Trump’s reasoning behind forgiving this Chinese company for being a bad actor.

Rep. Eric Swalwell accuses President Trump of trying to save Chinese company ZTE in order to benefit himself and his companies: "It does seem like the simplest explanation is the correct one — it's money" https://t.co/7PEl5DxyrH pic.twitter.com/SvnOVQh1QQ

And it would appear that the White House itself is either unable or unwilling to explain how Chinese funding of the project doesn’t violate the Constitution.

“The Trump Organization is involved in a project in Indonesia building hotels, golf courses, residences — it is getting up to $500 million in backing from the Chinese government,” Bierman began. “Can you explain the administration’s position on A, how this doesn’t violate the emoluments clause; and B, how this wouldn’t violate the president’s own promise that his private organization would not be getting involved in new foreign deals while he was president?”

Shah declined to answer the question. Instead he responded: “I’ll have to refer you to the Trump Organization.”

Pressed on the issues, he answered: “You’re asking about a private organization’s dealings that may have to do with a foreign government. It’s not something I can speak to.”

Last by not least, Norm Eisen, President Obama’s top ethics attorney, took to his Twitter account tweeting: “This is a violation of the Emoluments Clause. A big one. See you in court Mr. Trump.”

This is a violation of the Emoluments Clause. A big one. See you in court Mr. Trump https://t.co/JuSmCYChyh