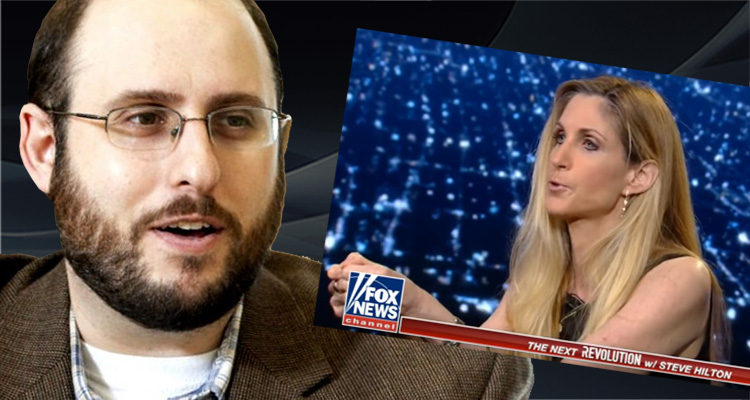 Former criminal investigator and criminal defense attorney, Seth Abramson, weighed in after controversial conservative wingnut Ann Coulter claimed that children crying at the border after being taken from their parents were “child actors.”

Coulter made the remarks during a Sunday appearance on Fox News.

During an appearance on Fox News’ “The Next Revolution,” Coulter claimed she read in The New Yorker that immigrant children were being fed “scripts” to make their plight seem more dire and she warned Trump against believing it.

“I would also say one other thing, these child actors weeping and crying on all the other networks 24/7 right now: do not fall for it, Mr. President,” she said, as host Steve Holton attempted to cut her off. “I get very nervous about the president getting his news from TV. … They’re given scripts to read by liberals, according to the New Yorker. Don’t fall for the actor children.”

Abramson posted a Twitter thread questioning what it might take to end Coulter’s career if such comments remain unchecked.

“I feel like there was a time in American history when this sort of comment would be career-ending. Am I wrong? Did we never have enough decency in America to shun a person who calls impoverished children ripped from their mothers’ arms in a strange land ‘child actors’? I wonder,” he began.

Continuing he asked: “Coulter is a political analyst. She gets booked, presumably, based on her *professional abilities* as an analyst. This sort of comment is as far outside the norms of professional practice as a lawyer showing up to court drunk. So why do media outlets book her for her analysis?“

Turning his attention to Fox News for their continued support of Coulter, Abramson tweeted:

“It’s high time someone at Fox News tells America *where its line is*. The line isn’t Hannity calling for a decorated war veteran investigating crimes for the FBI to be imprisoned; the line isn’t Coulter saying penniless children at the border are child actors; so where is it? I’m not talking about the line for ‘acceptable opinions.’ This is America—our laws establish when speech crosses legal boundaries. I’m talking about the line beyond which an outlet claiming “professionalism within its discipline” decides Coulter *isn’t* a professional analyst.”

He concluded with a post containing a link to Coulter’s Fox News appearance, tweeting: “Here’s the video (note that none of the three people on set object to her words).”

Abramson responded: “I do know—I just always thought, ‘Well, there’s *still* a line. There’s still *some* line, somewhere.’ I thought there was a point at which FNC would at least suspend her from appearing on the network for a period of time, if not sever ties formally.”

This isn’t the first time that Abramson has spoken out against Fox News. In April, he posted another thread about Fox News in response to an article by The Hill reporting that Fox News was most-watched cable news network for 65th consecutive quarter.

The core of Abramson’s grievance is the fact that Fox News is – at best –  what he called “entertainment journalism,” which is “more popular than hard news reporting.”

Abramson completed his thread with a reference to George R.R. Martin, the author of a series of epic fantasy novels titled, A Song of Ice and Fire, which was later adapted into the HBO series Game of Thrones: