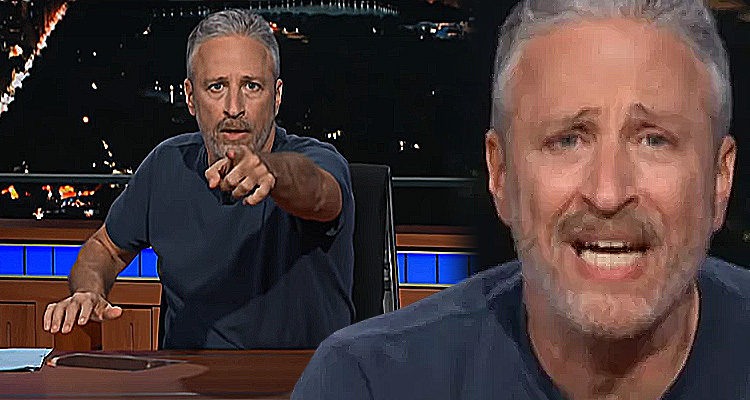 Jon Stewart made a surprise visit to “The Late Show” Thursday night, taking over for an 8-minute rant reminiscent of the good old days at “The Daily Show.”

Addressing Trump directly, Stewart stated: “I know you’re upset about all the criticism you’ve taken and the ‘fake news’ and the ‘fake late-night shows,’ it’s just we’re all still having trouble adjusting to your presidency as it goes into its 500th year.’

“Everything is off its axis, it’s a little unusual,” Stewart continued after a double-handed face palm, adding: “Apparently, now Putin and Kim Jong-un are noble intelligent role models and Canada’s a bunch of giant assholes. That’s hard to get used to. You’re redoing the post-war alliances – only this time we’re with the Axis powers.”

“One hallmark to your presidency we’re finding the most difficult is that no matter what you do it always comes with an extra layer of gleeful cruelty and d—ishness,” Stewart said.

Stewart went on to cite a panoply of examples, including Trump’s battles with the NFL and Senator John McCain (R-AZ), who is battling terminal brain cancer.

“It’s not just that you don’t want people taking a knee, it’s that they’re ‘sons of bitches’ if they do. It’s not just denying women who accuse you of sexual assault, it’s saying that ‘they’re too ugly anyway.’ You can’t just be against the media – ‘they’re enemies of the people.’ It’s not even partisan. Anyone in the Republican Party who dares speak out against you – they must be humiliated – even if they have a terminal disease.”

He also ripped Trump over his “zero-tolerance” immigration efforts and his policy of separating children from their parents at the border, telling Trump “Boy, you f-ed that up.”

Continuing, he stated that Trump’s immigration policy demonstrated “a Dickensian level of villainy.”

“You casually separated people seeking asylum from their children, their babies,” Stewart said, adding: “It made me realize something: You may be orange. You may like hamburgers. You may be a clown. But you are no Ronald McDonald.”

Moving along, Stewart tried to talk sense with Trump – to negotiate with him. “Clearly, we’re not going to be able to negotiate or shame you into decency, but there is one place where I draw the line: I won’t allow you and your sycophants to turn your cruelty into virtue,” Stewart said, following up by showing a montage of Fox News pundits and administration officials.

“What Donald Trump wants is for us to stop calling his cruelty and fear and divisiveness wrong, and join him in calling it right. This we can not do,” Stewart said. “By not yielding, we will prevail – unless, of course, the Democratic leadership continues to be a bunch of feckless …” – a reference to Samantha Bee who recently came under fire for calling Ivanka Trump the “c-word” for failing to convince her father to stop separating immigrant families.

Colbert leaped out from under the desk to prevent Stewart from finishing his sentence with that word.