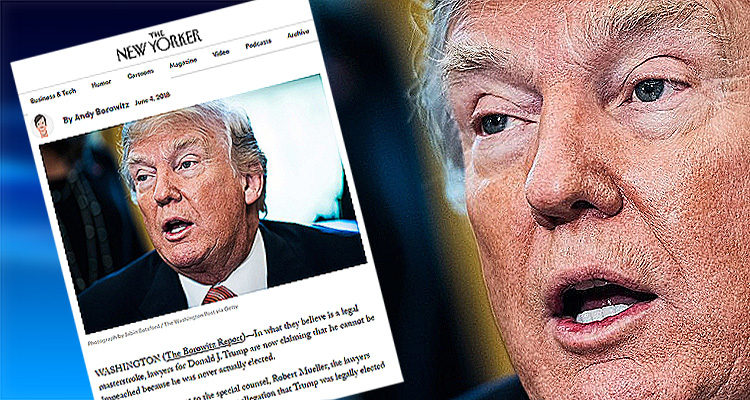 The New Yorker columnist Andy Borowitz delivered the perfect response to the possibility of Trump being impeached.

All hell has broken loose with team Trump as Special Counsel Robert Mueller’s investigation closes in on Trump and his accomplices.

Then there is the issue of reports from close friends of Trump’s former personal attorney, Michael Cohen, that he is about ready to flip on Trump and begin cooperating with federal prosecutors.

ABC News reported earlier this month that Cohen “is likely to cooperate with federal investigators, as his lawyers are expected to leave the case, sources said.”

Cohen, who is under federal investigation now with no legal representation, is likely to cooperate with federal prosecutors in Manhattan, sources said. This development, which is believed to be imminent, will likely hit the White House, family members, staffers and counsels hard.

There was more bad news this week when The New York Times reported on Tuesday that “A federal judge in Northern Virginia who had sharply criticized the special counsel’s case against Paul Manafort refused on Tuesday to dismiss the charges, clearing the way for Mr. Manafort to stand trial on charges of financial fraud.”

This ruling is particularly damning to Trump because, as with Michael Cohen, this development brings Manafort one step closer to being compelled to cooperate with Special Counsel Robert Mueller.

New York Times best-selling author and comedian Andy Borowitz took to his column – The Borowitz Report –  and weighed in on the possibility of Trump being impeached in a hilarious piece titled: “Trump’s Lawyers Argue That He Cannot Be Impeached Because He Was Never Actually Elected.”

In a lengthy memo sent to the special counsel, Robert Mueller, the lawyers pushed back vehemently against any allegation that Trump was legally elected President.

“Because Russian interference made the election of Donald J. Trump wholly illegitimate, any attempt to remove him from an office that he does not legally hold is clearly impossible,” the memo asserted.

Continuing, Borowitz took a jab at Trump lawyer Rudy Giuliani who has been falsely claiming that Trump cannot be subpoenaed.

The memo claimed that the Constitution contains “no provision for removing a person from office when that person was installed there by a foreign power.”

The memo went on to argue that, if a subpoena is sent to the White House, it will be returned to Mueller and stamped “addressee unknown.”

He even managed to toss Trump’s favorite news show into the mix, concluding his spoof writing:

Minutes after the memo was leaked, the former New York mayor Rudolph Giuliani appeared on “Fox & Friends” and proudly announced that he was its author.

“Sometimes I have to just step back and say, ‘Damn it, Rudy, you’re good,’ ” he said, beaming.