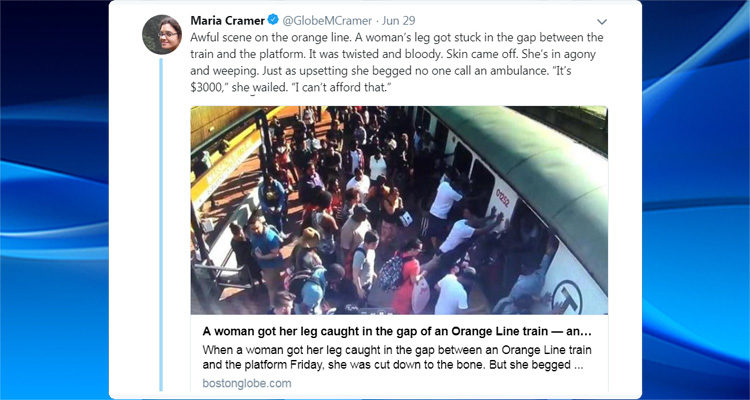 Boston Globe reporter Maria Cramer posted a heart-wrenching Twitter thread about a woman who had her leg caught between a train and the platform last Friday.

Awful scene on the orange line. A woman’s leg got stuck in the gap between the train and the platform. It was twisted and bloody. Skin came off. She’s in agony and weeping. Just as upsetting she begged no one call an ambulance. “It’s $3000,” she wailed. “I can’t afford that.”

She was, ultimately, transported via ambulance to a nearby hospital. A police report indicates the 45-year-old woman did not break any bones but lacerated her leg badly enough that she will likely need surgery.

6/ People have asked me if an uber could have been called instead. This morning, someone emailed me a link to a study about how uber can reduce the need for ambulances: https://t.co/kfYkVyhoVv

The Boston Globe reported that

[Cramer’s] account of the story has since been retweeted more than 7,000 times, and it demonstrates how cruel—some might say uncivil—it is to have a system in which someone can go broke if they get hurt, or that at the very least the crushingly expensive cost of care is something you have to keep on your mind, even if your leg is smashed by a train. “This Tweet Captures the State of Health Care in America,” wrote the New York Times editorial board, reflecting on the heartbreaking story.

Commuters rushed to rescue the woman after she became stuck in a gap between a train and the subway platform. The incident occured around 5:30 pm on Friday at the Massachusetts Avenue station, according to a police report. The gap was just 5 inches wide.

Surveillance video from the Massachusetts Bay Transport Authority Transit Police Department showed passengers rocking the train back and forth to free her.

Cramer followed up on Tuesday on Twitter. Writing of Transport Authority video, she tweeted:

The video shows at least ten passengers pushing on the car to get her out. To see so many people rush to help a person they didn’t know was incredibly moving. Afterwards, one woman who helped the injured woman wiped her hands with a napkin. She had woman’s blood on her.

She also addressed remarks regarding the possibility of using Uber for transport instead of an ambulance to save money.

People have asked me if an uber could have been called instead. This morning, someone emailed me a link to a study about how uber can reduce the need for ambulances. Link

However, in this instance an ambulance was necessary according to Cramer:

From what I saw on that platform on Friday, the idea of random people picking up this injured woman, carrying her through the crowd then up the elevator and through the station to a waiting car would have been a bad one. A nurse standing by said she needed an ambulance.

Cramer did look into the matter, regarding fees and found that ambulance transport was less than initially thought:

The injured woman said the ambulance would cost her $3000. EMS tells me the price would have been more like $1200 for someone with her injuries. That’s still a hefty price tag.

Cramer went on to explain Massachusetts healthcare option citing a conversation with Brian Rosman, policy director of Health Care for All.

Our thoughts and prayers go out to the unidentified woman in the incident and Cramer reports that there have been local efforts to assist the woman in paying her medical bills.