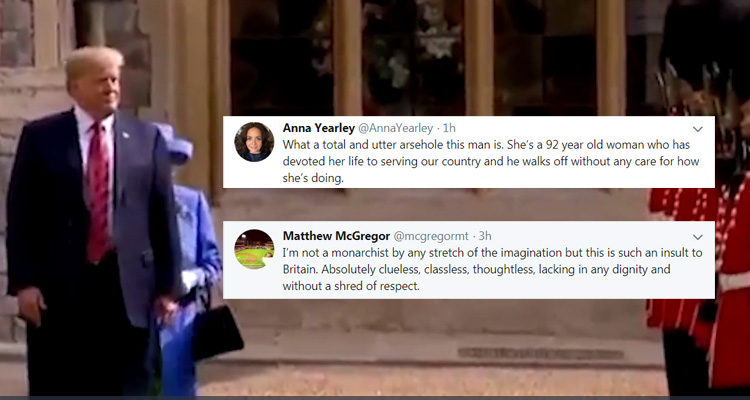 The United Kingdom responds after Trump commits the major faux pas with the Queen of England.

The title of a new article by The Guardian about Trump’s disastrous trip to the United Kingdom says it all: “Trump’s oily and obnoxious personality sorely tests British diplomacy.”

“Trump’s Jekyll and Hyde performance on the opening leg of his European tour – one minute angrily wielding a wrecking ball and the next playing the oleaginous anglophile – will hardly leave European diplomats, especially those in Britain, reassured as they brace themselves for his bilateral summit with Vladimir Putin on Monday,” read the first paragraph.

Continuing, Vice News reported that: “In perhaps the most aggressive British action against Trump yet, the Queen was seen twice checking her watch, even as she continued to stand outside wearing a hat and coat in the middle of the summer.”

The Queen has now been waiting more than 10 minutes. pic.twitter.com/qVGi4PlxCr

The Independent reported that, upon his arrival, Trump committed two more faux pas. First, he failed to bow before the Queen – a first for a head of state. Not yet satisfied, Trump then walked ahead of the Queen.

Writing of the incident, The Independent reported that Trump “quickly defied royal protocol by walking ahead of the monarch during an inspection of the Coldstream guards.”

The British were quick to respond, with one woman tweeting: “What a total and utter arsehole this man is. She’s a 92 year old woman who has devoted her life to serving our country and he walks off without any care for how she’s doing.”

What a total and utter arsehole this man is. She’s a 92 year old woman who has devoted her life to serving our country and he walks off without any care for how she’s doing. pic.twitter.com/2TGZYS2r1Q

Another individual tweeted: “I’m not a monarchist by any stretch of the imagination but this is such an insult to Britain. Absolutely clueless, classless, thoughtless, lacking in any dignity and without a shred of respect.”

I’m not a monarchist by any stretch of the imagination but this is such an insult to Britain. Absolutely clueless, classless, thoughtless, lacking in any dignity and without a shred of respect. pic.twitter.com/RBFXe4yZ9H

Trump had already insulted Prime Minister Theresa May, giving an interview with The Sun during which he totally thrashed her in what many consider a thinly veiled effort to depose her. The Guardian reported on the interview, writing:

The combination was always going to be high-risk. Donald Trump, straight-talking disruptor-in-chief, grants an interview to the Sun, a newspaper in so many ways the US president’s natural forum. The interviewer’s 10-minute slot stretches to 28; the interviewee is clearly enjoying himself, and the resulting headlines – “May has wrecked Brexit”, “US trade deal is off” – appear slap-bang in the middle of the prime minister’s grand opening effort to convince him of the contrary.

The insults continued for page after lurid page, including dismissive comments about the prime minister’s new plan for Brexit (“I think the deal is not what the people voted on”); about Theresa May’s conduct of the negotiations (“I actually told Theresa May how to do it, but she didn’t listen to me … she wanted to go a different route”); and – dear, oh dear – about the “very talented guy”, Boris Johnson, who “would be “a great prime minister”, whom he was “surprised and saddened” to see leaving government.

Trump is set to meet with Putin next week after a planned weekend of…. yep you guessed it – Golf!