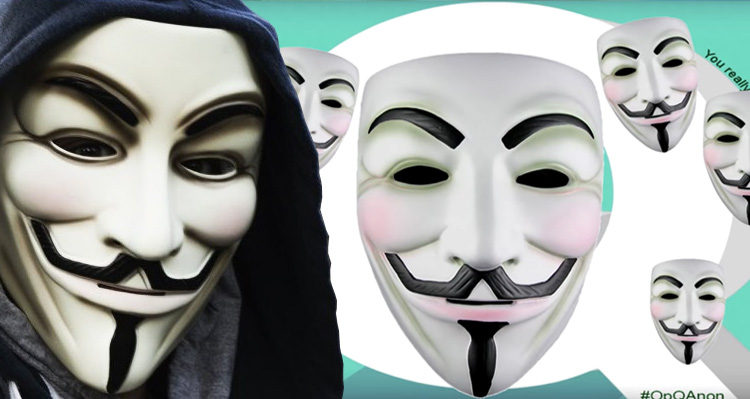 Hacktivist collective Anonymous warns QAnon that they are about to receive a “thrashing of butt hurt” in the wake of their absurd conspiracy theories.

Their theories are based on a person, or small group of people, first identifying themselves as “Q” on the /pol/ board of 4chan, which is often the online hangout for anonymous Nazi-sympathizers…

The main beliefs of QAnon are that Barack Obama, Hillary Clinton, George Soros, and other officials are in the planning stages of a systematic coup against the Trump Administration, while they also are allegedly involved in a child sex trafficking ring.

Reporting that “QAnon feeds off of mainstream media attention,” Krassenstein added that: “This attention, however, may have brought in an unwanted guest.”

Another anonymous group, the hacking group called ‘Anonymous’, has declared war on QAnon this week. The Twitter profile @YourAnonNews, which has 1.6 million followers and is believed to be the central hub, of sorts, for the Anonymous group, has just released a video [below] and subsequent Twitter campaign threatening to “wreck” QAnon.

Anonymous announced their campaign in the form of a video press release posted on YouTube and promoted on Twitter.

“If you’re against the psychological operation known as #QAnon, please share our press release far and wide! Follow hashtags #OpQ and #OpQAnon for the lulz! We are Anonymous,” they tweeted

If you're against the psychological operation known as #QAnon, please share our press release far and wide! Follow hashtags #OpQ and #OpQAnon for the lulz!
We are Anonymous.https://t.co/5WzagrWw30

Highlights from their press release included the following promise:

That crazy pedophile conspiracy you Q’s are throwing around while ignoring Trump’s own connections makes us wonder why? Seems you have some kooky political agenda. We don’t like brainless political agendas; hell we don’t even like political agendas at all, so get your @sses ready for a thrashing of butt hurt. You got all these foolish people all riled up with no proof, no leaks. We have plans. We will not sit idly by while you take advantage of the misinformed and poorly educated. In our collective we all have our differences and internal drama but we do have one thing in common; none of us are happy with your bullsh*t. And oh my god, oh no – it’s teh real “Anonymous” they deep state fedz oh my god ohmygod *insert conspiracy* theory omg help. We gonna wreck you. We are Anonymous, We are legion, We do not forgive, We do not forget.

You can watch their video, below, and you can click here to read their full press statement which is listed in the description of the video.