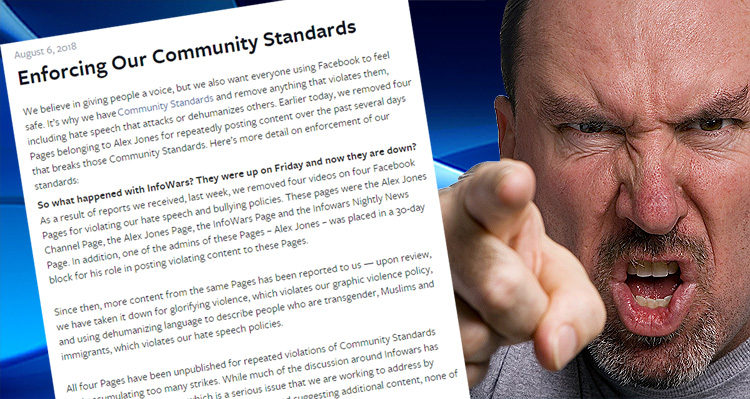 Alex Jones has not been having the best of months, but things just got a lot worse as first Spotify and then Apple and now Facebook put their collective feet down and terminate this kind of conspiracy.

The news exploded on Monday, as three prominent social media companies announced they were taking action to eradicate their platforms of the continued presence of Alex Jones and his InfoWars project.

Facebook took the bold step of publishing an entire article on their press blog detailing their policy against hate speech and bullying. Their article went on to detail the rationale behind their decision to pull 4 of Jones’ pages: the Alex Jones Channel Page, the Alex Jones Page, the InfoWars Page and the Infowars Nightly News Page.

According to Facebook, their decision was based upon repeated community standards violations and not for Jones’ publication of false conspiracy theories:

When it comes to our Community Standards, they’re focused on keeping people safe. If you post something that goes against our standards, which cover things like hate speech that attacks or dehumanizes others, we will remove it from Facebook.

Buzzfeed News reported on Monday that Apple was following suit and removing Alex Jones and InfoWars podcasts from iTunes.

Apple’s decision to remove all episodes of Jones’ popular show — rather than just specific offending episodes — is one of the largest enforcement actions intended to curb conspiratorial news content by a technology company to date. Apple did not host Jones’s shows, but it offered an index that allowed anyone with an iPhone to find and subscribe to them. Though Apple is far from Jones and Infowars’ only distribution platform, the decision to pull Jones’ content will considerably limit the outlet’s audio reach — as of 2018, Apple’s Podcasts platform amassed 50 billion all-time downloads and streams.

In a statement Sunday evening to BuzzFeed News, Apple confirmed that it notified Jones of the decision to remove the five shows under its hate speech guidelines earlier this weekend. “Apple does not tolerate hate speech, and we have clear guidelines that creators and developers must follow to ensure we provide a safe environment for all of our users,” a company spokesperson said. “Podcasts that violate these guidelines are removed from our directory making them no longer searchable or available for download or streaming. We believe in representing a wide range of views, so long as people are respectful to those with differing opinions.”