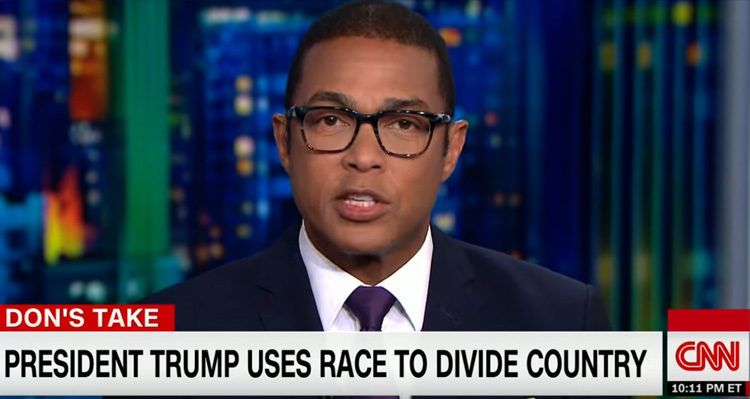 Calmly, and without any fanfare, Don Lemon delivers one of the most powerful Trump take-downs so far. CNN’s Don Lemon responds to President Donald Trump’s personal attack on himself and NBA star LeBron James, saying “referring to African-Americans as dumb is one of the oldest canards of racism in this country.”

It started with a Don Lemon interview with NBA star LeBron James, who told the CNN anchor that he felt that Trump was “using sports to kinda divide us.”

“Sports has never been something that divides people,” James told Lemon. “It’s always been something that brings someone together,” continued, adding that it was a situation he couldn’t  “relate to” because “sports was the first time I was around someone white.” He also explained that Trump’s behavior indicated that he was enabling racist behavior.

Trump responded by tweeting: “Lebron James was just interviewed by the dumbest man on television, Don Lemon. He made Lebron look smart, which isn’t easy to do. I like Mike!” – a reference to Michael Jordan.

As Business Insider reported, “athletes and politicians” alike erupted in response to his tweet.

CNN responded with a lengthy article explaining that “Trump’s attacks on Lebron fit a disturbing pattern [of] intentionally espousing the views of white supremacists.”

Monday evening, Don Lemon addressed Trump’s “nasty, hateful” tweet, calling it “one of the oldest canards of racism” in our country.”

“This president traffics in racism and is fueled by bullying,” Lemon stated on his prime time show. “Referring to African-Americans as dumb is one of the oldest canards of America’s racist past and present — that black people are of inferior intelligence.”

“Let me not mince words here: This president traffics in racism and is fueled by bullying — from keeping children at the border in cages to bullying journalists at every one of his rallies,” Lemon continued. Trump “divides by race and tries to conquer decency by smearing and besmirching the truth and the people who fight to uphold it.”

Contrasting James’ response versus that of Trump, Lemon added: “Unlike this president who lashes out wildly at anyone who criticizes him, LeBron James — in addition to being a brilliant black man, a superstar in his sport, and a hero to his community — is taking the high road, which is exactly where he belongs.”

Continuing, Lemon noted that although there was an “overwhelmingly negative response” to Trump’s “unfair and unkind attack on a good man, LeBron James,” his remarks raised concerns about Trump’s treatment of immigrants and minorities who did not have the same ability to stand up for themselves that sports figures do.

What about the impact [Trump’s] policies have on those without a platform through sports like Lebron or through media like me? What about those who don’t have a voice, what is this presidency doing to them? — The kids separated from their parents at the border, the kids who don’t have the chance to attend Lebron’s school or any halfway decent school. Their parents can’t honestly tell their children to be proud of the president of the United States. The people of color who are attacked by their fellow citizens who feel emboldened to be publicly racist because the president is.

Will the country stand up for them? We, the decent and truly patriotic people who really love America and believe in its greatness, have to — because clearly, Donald Trump won’t.”

You can watch Don Lemon’s powerful response, below: