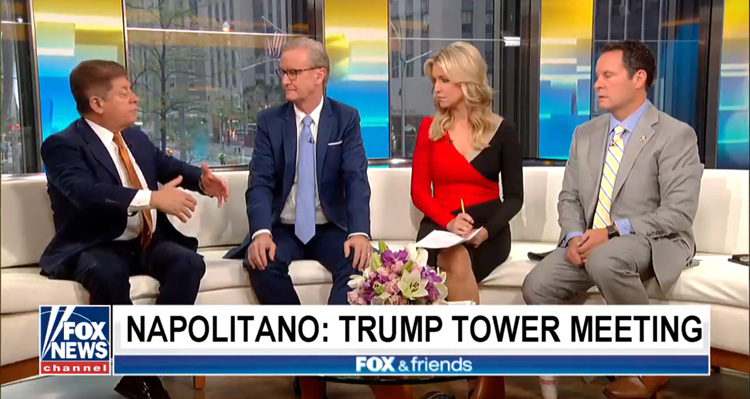 Andrew Napolitano tells Fox & Friends that the Trump Tower meeting could be a crime despite Trump’s insistence it was fully legal.

Increasingly concerned that Special Prosecutor Robert Mueller is closing in on his family, Trump took to Twitter over the weekend to fight back.

David Frum, the Senior Editor for The Atlantic and author of “Trumpocracy: The Corruption of the American Republic” (HarperCollins, Jan. 2018), weighed in on the post with a suggested title and lede.

Fox News senior judicial analyst Andrew Napolitano appeared on Fox News program “Fox & Friends” on Tuesday to discuss the possible legal ramifications of the Trump Tower meeting and Trump’s tweet and admitted that it could amount to a crime of conspiracy.

The Hill reported that:

During an appearance on “Fox & Friends”, host Steve Doocy asked the analyst whether it is against the law for a person who works in politics to “try and dig up dirt on your opponent?”

“No of course not, and everybody does it, and to that extent, the president’s correct,” Napolitano said.

But the analyst added that there are “federal statutes that prohibit receiving something of value from a foreign national, foreign entity, or foreign government.“

“So was the purpose of this meeting to receive something of value? That’s something Bob Mueller’s going to have to look at,” Napolitano continued. [emphasis added]

“I don’t know the answer to that. But unfortunately, a lot of these statutes are written to make it easier for the government to convict,” Napolitano responded, conceding that: “if there was an agreement to receive dirt on Hillary, from the Russians, even if the dirt never came, if those who agreed, at least one of them, took some step in furtherance of the agreement, then there is the potential crime for conspiracy.” [emphasis added]