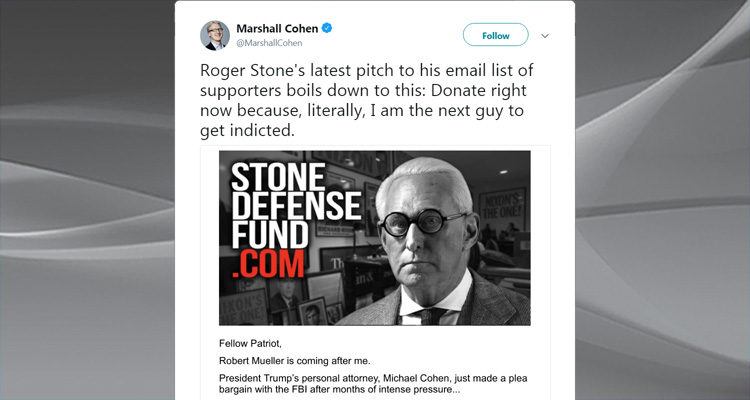 Last week was arguably the worst week for the Trump administration since he assumed office roughly a year and seven months ago.

Longtime Trump friend and adviser, Roger Stone, appears to be panicking in the wake of those events, sending out a panicked email plea for money from his fans.

Researcher and producer for CNN’s Political Unit, Marshall Cohen, published a copy of the email to his Twitter account Sunday evening. With it, he tweeted: “Roger Stone’s latest pitch to his email list of supporters boils down to this: Donate right now because, literally, I am the next guy to get indicted.”

“Fellow Patriot, Robert Mueller is coming after me,” the email began. “President Trump’s personal attorney, Michael Cohen, just made a plea bargain with the FBI after months of intense pressure… and I’m next on the crooked special prosecutor’s hit list because I’ve advised Donald Turmp for the past 39 years.”

Concluding, the email stated that: “I am being targeting not because I committed a crime, but because the ‘deep state’ liberals want to silence me and pressure me to testify against my good friend President Donald J. Trump.”

Roger Stone's latest pitch to his email list of supporters boils down to this: Donate right now because, literally, I am the next guy to get indicted. pic.twitter.com/sWAx2BQtSJ

The website referred to in the email, stonedefensefund.com, was registered on August 27, 2017 but it is unclear how long the website has actually been there.

Browsing the website itself, the site and Stone’s email mirror each other for the most part.

Despite a lack of evidence of Russian Collusion, Wikileaks collaboration or any other illegal activity in the 2016 election, long time Trump advisor Roger Stone has been targeted by Special Counsel Robert Mueller. Mueller seeks to criminalize normal political activities by Roger Stone while ignoring the blatantly illegal activities of the Clinton campaign and the Obama NSA,DOJ and FBI.

Roger Stone refuses to be pressured into testifying against President Trump.

So, of course, he is asking for your money, claiming “his legal fees in this epic fight could top $2 million, threatening to destroy him and his family.”

“Please help us. Everything will be used to help defray the costs of keeping up the battle against those that would silence Roger Stone and turn him against President Trump,” the website states.

Scrolling down to “learn more” as the website directs, viewers can read that: “Roger Stone is under attack!”

It is becoming clear that Special Counsel Robert Mueller intends to frame Roger Stone for some bogus “offense” unrelated to Russian collusion, Wikileaks, or perhaps even the 2016 election.

The Congressional investigations into Roger are a runaway train.

To silence Roger and destroy him and his family, the Clinton/Obama DNC and their sore loser supporters are suing Roger because they lost the election.

And predictably, there is a second opportunity to donate money.